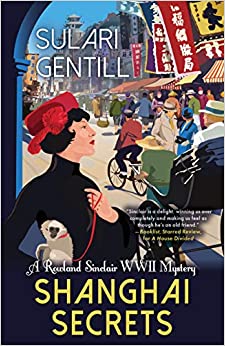 No one is happy with what COVID has done to author appearances and conferences. However, authors are able to make appearances now from all over the world via the virtual events. Recently, Barbara Peters, owner of The Poisoned Pen, welcomed two bestselling authors from Australia. Sulari Gentill’s latest book is Shanghai Secrets. Emma Viskic’s latest title is Darkness for Light. You can order copies of their books through the Web Store. https://store.poisonedpen.com/

In a city full of strangers, be careful whom you trust…

Shanghai, 1935. Black sheep gentleman Rowland Sinclair arrives with his bohemian housemates from Sydney, Australia to explore a new city and take the name Sinclair international with a new class of negotiations. A novice to global commerce, Rowland is under strict instructions from his brother to keep a low profile…but that soon becomes next to impossible. A beautiful Russian taxi girl—who once claimed to be the Princess Anastasia and who danced in Rowly’s arms the night before—is found slain in his suite.

Out of sympathy for the murdered girl and to clear his name, Rowly and his companions embark upon their own investigation. They soon discover there are many people who may have wanted Alexandra Romanovna dead. As they are drawn deeper into Shanghai society and its underworld, Rowly searches for answers in a strange city determined to ruin him.

Exploring the simmering underbelly of Shanghai just years before WWII, Shanghai Secrets is a historical mystery that brings alive an expatriate playground where East and West collide, the stakes are high, and fortunes—and lives—are easily lost.

After setting out to study astrophysics, graduating in law and then abandoning her legal career to write books, Sulari now grows French black truffles on her farm in the foothills of the Snowy Mountains of NSW. Sulari is author of The Rowland Sinclair Mystery series, historical crime fiction novels (eight in total) set in the 1930s. Sulari’s A Decline in Prophets (the second book in the series) was the winner of the Davitt Award for Best Adult Crime Fiction 2012. She was also shortlisted for Best First Book (A Few Right Thinking Men) for the Commonwealth Writers’ Prize 2011. Paving the New Road was shortlisted for another Davitt in 2013.

Caleb Zelic can’t hear you. But he can see everything.
The latest pulsating thriller in the Caleb Zelic series

After a lifetime of bad decisions PI Caleb Zelic is finally making good ones. He’s in therapy, his business is recovering and his relationship with his estranged wife Kat is on the mend.

But soon Caleb is drawn into the tangled life of his troubled ex partner Frankie, which leads to a confrontation with the cops. And when Frankie’s niece is kidnapped, she and Caleb must work together to save the child’s life. But can Caleb trust her after her past betrayals?

Emma Viskic is an award-winning Australian crime writer. Her critically acclaimed debut novel, Resurrection Bay, won the 2016 Ned Kelly Award for Best Debut, and an unprecedented three Davitt Awards: Best Adult Novel, Best Debut, and Readers’ Choice. It was also iBooks Australia’s Crime Novel of the year, and was shortlisted for both the CWA Gold and New Blood Daggers in the UK. Emma studied Australian sign language (Auslan) in order to write the character of Caleb Zelic. She is currently writing the fourth Caleb Zelic thriller.

It isn’t often you’ll be able to spend time with Australian mystery writers. Enjoy the recent event with Sulari Gentill and Emma Viskic.