Katharine Schellman, In the Hot Seat

I don’t always have a book trailer to share for a debut novelist. I’m pleased that I have the opportunity to introduce you to Katharine Schellman, author of The Body in the Garden. I hope we interest you enough that you want to order a copy of the historical mystery through the Web Store. https://bit.ly/2xXjIHb

Katharine, would you introduce yourself to readers?

Thanks so much for having me!

I’m a former actor, a trained dancer, and a one-time political consultant. But my husband once said he should have known I was meant to write murder mysteries because I’m constantly killing our houseplants. The Body in the Garden is my debut novel, and saying that out loud still feels surreal!

Without spoilers, tell us about The Body in the Garden.

The Body in the Garden is a historical mystery. There’s a dead body, a few red herrings, and an amateur sleuth who is determined to find the truth.

It’s also the story of Lily Adler, a young widow in early 19th-century England who is trying to rebuild her life. She lives in an era where being widowed granted women a lot of social and financial freedom that they wouldn’t have otherwise had (which is a perfect situation for a sleuth to be in). But for her, it came at the cost of losing someone she loved deeply.

Lily is trying to find out what comes next for her, and she (almost literally) stumbles over an answer to that question when a stranger is found murdered at her friend’s home.

Introduce us to Lily Adler, please. Would you also talk about Captain Jack Hartley?

Lily was an interesting character to write because her circumstances require a certain suspension of disbelief. The average person struggling with grief doesn’t find purpose again by solving a murder! But she’s also someone standing at a big crossroads: the life she planned fell apart, and now she has to create a new one and isn’t sure how to do that.

That feeling, I think, is something most people can relate to, and it’s what I hope grounds her as a character.

And I love that you asked about Jack! Jack was the childhood best friend of Lily’s husband, and he becomes an unexpected source of support through her grief.

My goal was for them to really balance each other out — each one helps the other grow in ways that seemed impossible at the beginning of the book. The tone of my original draft was more darkly comic and tongue-in-cheek. Though subsequent drafts changed, a bit of that playfulness remains in Lily and Jack’s friendship. They were so much fun to write together!

Why did you pick 1815 London as the time and setting for your first mystery?

One of my main characters was inspired by Miss Lambe from Jane Austen’s Sanditon, so setting it in early 19th century England happened naturally. That was a place and time that I had read a lot of fiction set in or written during, so I thought I was really familiar with the era. When I started writing, though, I discovered how much I still had to learn.

I hope the final book gives readers a new look at an era that might already think they know everything about. I wanted to show a bit of how much was going on beneath the surface of a world that was superficially very placid and elegant.

You did such a beautiful job with the descriptions of society, social classes, and London of this time. Please tell us about your research and sources.

I had to research everything, from checking maps for the names of landmarks to reading letters and court records for a sense of colloquial speech to studying fashion plates to learn about nuances of dress. I especially had to do a lot of research into what life would have been like for people who were not upper class, or not white, or not wealthy.

Fortunately, there are lots of amazing historians out there whose books and research I could use. I listed many of them in my author’s note at the end of the book, but the most fun to read was probably Georgette Heyer’s Regency World by Jennifer Kloester. I’d recommend anyone interested in the time period pick that one up!

For me, research isn’t a one-and-done thing: I was looking things up and checking details all the way through my last pass with my editor. Of course, only about 30% of that research actually makes an appearance in the novel, but it informed everything I wrote. But in spite of all that, the book is still a work of fiction. My goal is to try to create as realistic a world as possible but still tell a good story. So there are certainly moments where I’ve made the decision not to worry about historical details! They just might not be where you expect.

I’m not looking for spoilers for the next book, but can you tell us anything about the next book in the Lily Adler series?

My editor and I are still working out some details, but I can say without spoilers that there are many familiar faces and Lily will be asked to help catch another murderer. Readers will also meet her father and get a peek at that tumultuous relationship. Lily might discover that he knows a thing or two about the person who was murdered!

Everyone takes a different path to publication. How did you become a published author?

I first announced that I wanted to be a writer when I was about six years old, and I was fortunate to get a lot of encouragement from my parents, who are big readers. I wrote my first novel when I was 15, and it was thoroughly terrible. It, and several others, are saved on my hard drive and will never see the light of day again! But each one was really good practice.

The first draft of the book that eventually became The Body in the Garden was not good (and that’s a generous assessment). But when I read back through it, I knew it had potential, and I was still really excited about the characters and the story. So I started editing.

After five drafts and input from some very generous readers, I was ready to start querying. That was a surprisingly wonderful and encouraging experience! I signed with my agent four weeks after I sent my first query letter. We spent the summer revising, went on submission that fall, and sold the book to Crooked Lane in April, just under a year after I started querying. Publication was scheduled for April 7, 2020, just under a year after that.

So from starting to write that very first draft of the book to my pub date will be about five years. It felt very long at the time. But I’ve discovered that, in the grand scheme of traditional publishing, five years isn’t much time at all!

What mysteries did you read that led you to want to write a historical mystery?

I didn’t realize it when I first started writing this book, but I really grew up with mysteries. I read many mysteries for kids that my mother had held onto from her childhood; Mystery at Laughing Water by Dorothy Maywood Bird was one of the first I fell in love with. And I used to watch Masterpiece Theatre with my parents, so lots of Miss Marple and Hercule Poirot stories.

When I got a little older, I started reading all the Agatha Christie books those shows were based on, which eventually led me to more modern crime writers. So mysteries — especially traditional and historical mysteries — were something that I spent a lot of time with and really loved.

It never really occurred to me to write my own, though! All my “novels in a drawer” are in other genres. Before I started writing The Body in the Garden, it wasn’t a genre I had ever pictured myself writing in, even though it was one I loved reading. I generally start with characters, rather than plot. So for a while, I had these people in my head, and I wasn’t sure what would bring them together in this setting. When I finally realized it was a dead body, everything just clicked: “Oh, that’s what they’re doing here!”

Of course, once I started writing I discovered that reading and loving mysteries does not translate to knowing how to write one. I had to spend several drafts learning how to structure and develop a mystery. It was — and is! — a fun challenge.

If you had to recommend 5 books to a person so they could get a feel for your reading taste, what 5 would you pick?

Only five? That’s going to be tough. Let’s go with:

That’s four genres between five books — my reading taste is very eclectic! If I could list ten, things would start to get really wild… 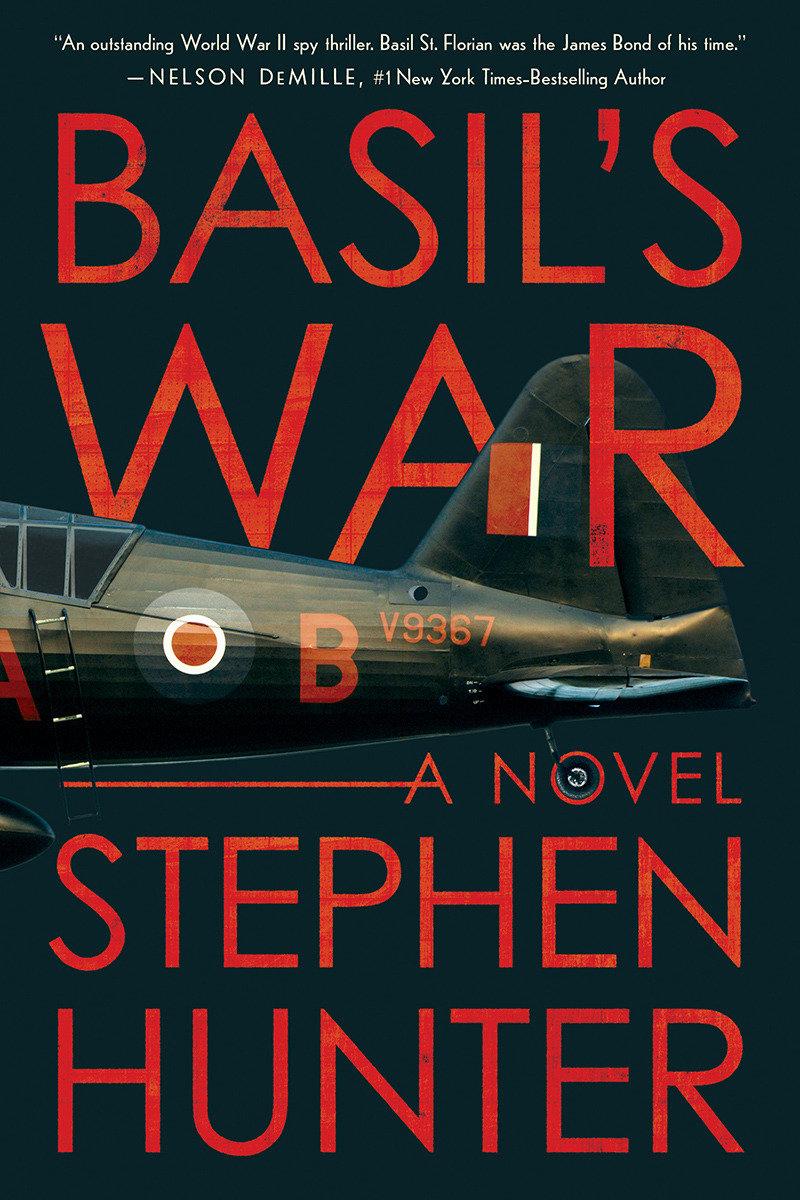 What a great conversation tonight with the diabolical duo of Linwood Barclay and Peter Swanson celebrating the launch of Linwood's new thriller today May 3. Bookplates signed by Linwood come with our copies of Find You First. Watch the video on our Facebook video page. No need to belong to FB

What a great conversation tonight with the diabolical duo of Linwood Barclay and Peter Swanson celebrating the launch of Linwood's new thriller today May 3. Bookplates signed by Linwood come with our copies of Find You First. Watch the video on our Facebook video page. No need to belong to FB
And here is the map showing the family's three journeys during the war years. You can trace them
Join us at 6 pm PDT tonight May 3 for the launch of Mark Sullivan's inspiring yet harrowing account of a family's combined heroism fleeing the advancing Red Army West into Nazi Germany...and what happened through the decades after. Autographed copies available from the author of mega seller Beneath a Scarlet Sky
The yucca is getting ready for full bloom while dancing in the breeze
The gardenias have burst out all at once
Two new editions of classics for you. Pauline Hopkins in The Haunted Library horror series. Arthur B Reeve in The Library of Congress Crime Classics series. Kudos to editor and annotator Leslie S Klinger for both.
Loading Comments...
Comment
×
%d bloggers like this: