On Wednesday, August 29 at 7 PM, Hank Phillippi Ryan will be at The Poisoned Pen to discuss her just-released standalone, Trust Me. She’ll be joined that evening by Steve Hamilton who will sign Dead Man Running. Signed copies of both books, as well as other books by the authors, are available through the Web Store. https://store.poisonedpen.com

If you miss Hank on Wednesday evening, you can always catch up with her next weekend. She’s participating in the mystery celebration as Poisoned Pen hosts Ian Rankin and others to celebrate his thirty years of publication in the United States.

It’s always fun to put this investigative reporter “In the Hot Seat”. Hank took time to answer questions about Trust Me, and a few other topics. Thank you, Hank. “Taking time from your busy schedule” sounds so trite, but if anyone has a busy schedule, it’s Hank Phillippi Ryan.

LESA: Hank, although you’ve “visited” the blog and the Poisoned Pen before, we still need an introduction. Tell us about yourself, please.

HANK: I lead a double life! By day I’m the investigative reporter for Channel 7 in Boston—and I’ve been a reporter for 40 years. (And have 34 Emmys to prove it. I just don’t know what happened those years…) I’ve worked as a legislative aide for a US senate Judiciary committee, and as a staffer at Rolling Stone magazine, editing a column called Capitol Chatter, and doing projects with Hunter S. Thompson and Richard Avedon. I’m married to a truly good guy, a criminal defense and civil rights attorney—he was one of Mohammed Ali’s lawyers in his Supreme Court case, and he does a lot of incredibly great work. But at age 55 (!) I got a terrific idea for a mystery. And I thought—yes. This is what I’ve always wanted to do! And that became PRIME TIME, which own the Agatha for best first mystery. And now, amazingly, TRUST ME is my tenth novel. And first standalone.

LESA: Tell us what you can about Mercer Hennessey.

HANK: Ah. Mercer Hennessey is a main character in TRUST ME. She’s a magazine writer, successful and smart, who quit a fancy magazine job to be a wife to her dear husband Dex and their precious daughter Sophie. But—so sad!–when Dex and Sophie were killed in a terrible accident, Mercer’s life collapses. As the book opens she is writing the number 442 in the steam fogging her bathroom mirror—the number of days since she lost her family. And she’s wondering if there’s a real reason ever get up in the morning again. We like her, very much, and we feel sorry for her. But…

LESA: I read Trust Me, so I know it’s a hard story to summarize without spoilers, and it’s even hard to introduce Mercer. Give us the elevator pitch, please, without spoilers. 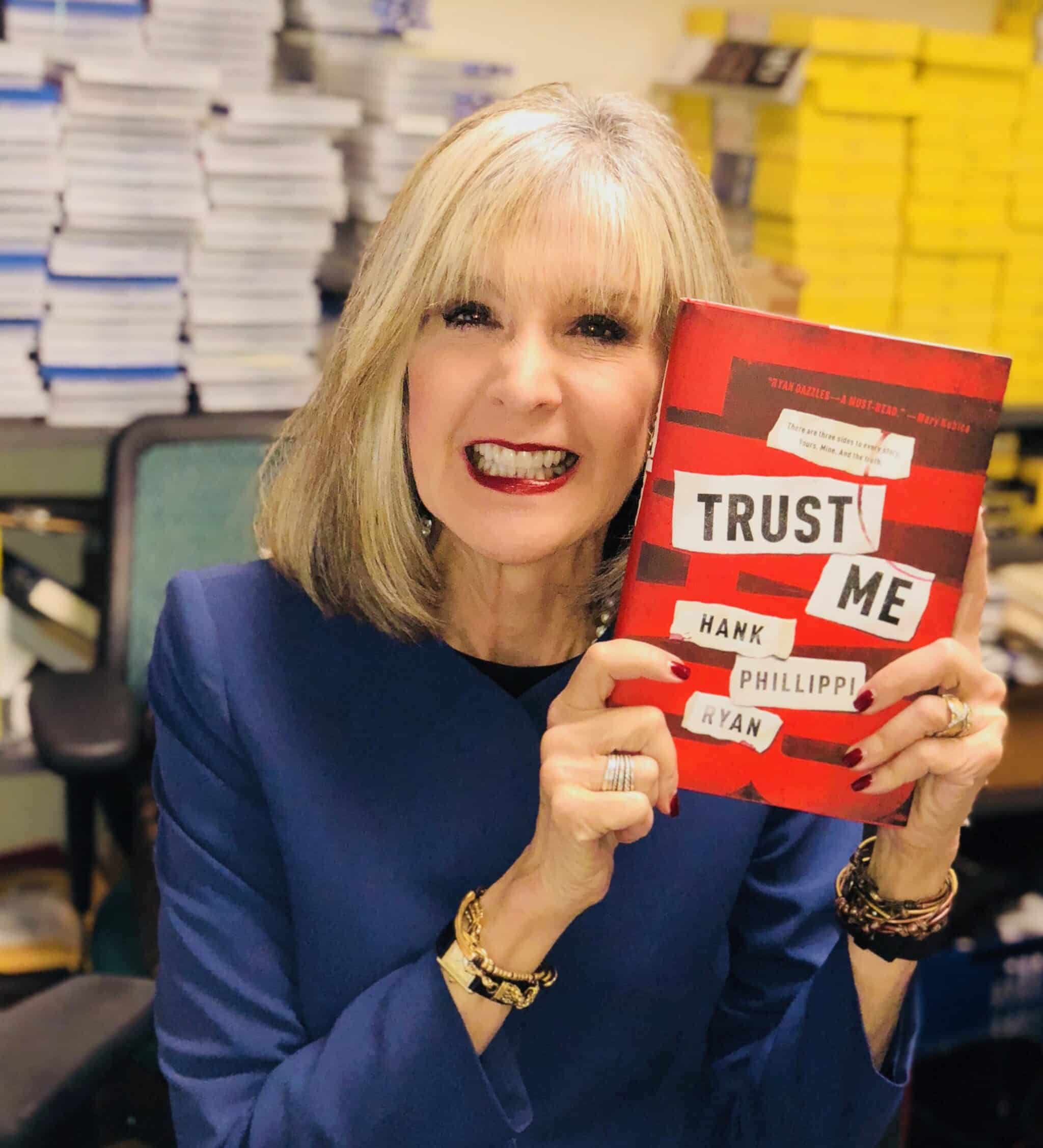 HANK: Yeah. That’s what stopped me above. An obsessed journalist. A pony-tailed suburban mom. Two strong women facing off in a high-stakes cat and mouse game to prove their truth about a terrible murder—but which one is the cat, and which one is the mouse? Only one can prevail. I dare you to find the liar.

(And it’s been chosen as a Best Thriller by Real Simple Magazine, and PopSugar, and the New York Post, and BookBub, and Crimereads. So I’m pretty excited. A starred review from Booklist called it “a knockout.” )

You know, I sit in this little study every day by myself and write—so those raves are pretty lovely to hear. And yours ,too, Lesa! “Better than Gone Girl?” Whoa. I had a t-shirt made of that.

LESA: You’ve written two series, the Jane Ryland books and the Charlie McNally mysteries. Now, a standalone. What was difficult about writing a standalone after writing a series? Was there a freedom involved as well?

HANK: Oh, it’s amazing. Amazing. In my series—well, let’s put it this way. Jane Ryland, the man character of SAY NO MORE and the other Ryland thrillers, isn’t gonna die. Right? We know that, because she and Jake will be back in book six. So our suspense comes from participating in the dangerous investigation with her—and seeing how she can solve the crime and find the bad guy using her skills and intelligence. We know she’ll get in trouble—it’s a thriller after all. But she’s not gonna die. And that’s a challenge, right? Because the reader knows that.

Earlier I said I dare you to find the liar. That’s a real dare—because I’ll reveal to you, dear Lesa, that as I was writing, I had no idea who was telling the truth, or what the truth even was. So people say wow, the end of Trust Me, that really surprised me! And I say, I know, right? Talk about a surprise ending, I surprised myself. Truly? The reason I loved coming to my computer every day was that I could not wait to see what happened.

LESA: What’s next? What are you working on, or what have you recently finished?

Oh, wow. Yeah. Well, because you can always get me to reveal everything—I’m almost done, (truly editor Kristin, almost done) with my next psychological standalone, The Murder List. So we can talk about that next July! Ish.

HANK: I’m hosting the Agatha Christie tea, can you believe it? And we’ll have an amazingly hilarious quiz, and I know Barbara Peters is going to try to get me to wear a fascinator. Don’t tell her, but I absolutely refuse. (Are you wearing one?) And trust me, I’ll be there for all the events. I mean—Ian Rankin! My hero. We were together at an event in Boston, and I billed it as Hank “˜n Rankin.

Bouchercon? You know, that’s SO exciting. Trust Me will have been out for about thirty seconds when Bouchercon time comes, so I’m so eager to share it with everyone. I’m hosting the Dolly Parton auction with the amazing Lisa Unger, and doing three panels—yikes!—one with you! SO looking forward to seeing everyone.

And then big book tour! My publisher Forge is incredible—I’m on the road for months. And treasuring every moment. I hope to see everyone—my schedule is at www.HankPhillippiRyan.com

LESA: Here’s a question I frequently ask authors, but I don’t think I’ve asked you. When visitors come, and you want to show off Boston, where do you take them?

HANK: Great question! The USS Constitution, for sure. It’s fascinating, and historic, and always kind of brings a tear to my eye. We go to Boston Common, where I keep thinking Sam Adams and Paul Revere and John and Abigail Adams walked. The swan boats in the gorgeous Public Garden. And the Old City Hall, where the founding fathers stood on the balcony, and first read the Declaration of Independence out loud to the colonists below. Then we get lobster rolls at The No-Name Seafood restaurant for lunch. Then the Isabella Stewart Gardner museum—with its empty frames signifying the massive and still-unsolved robbery—and then a stroll through Beacon Hill, with a visit to Spenser’s apartment. Finally , dinner somewhere, at one of Boston’s topnotch restaurants, or maybe, at my house. And then, a walk through the North End for espresso and cannoli. Are you up for it?

LESA: I’m ready, Hank! I love to visit new places. You’ve traveled quite a bit as a reporter, an author, and when you were President of Sisters in Crime. What city or country is still on your bucket list, and why?

HANK: Well, the US! Alaska, I’d really love to go! It seems so vast, and dangerous and beautiful and gorgeous. (It’s Kristin Hannah’s fault.) And the Amalfi Coast. And weirdly, I’ve never been to Venice. So, there.

LESA: I’ve never asked about your childhood reading. What books did you love as a child?

HANK: Aww. I read all the Edward Eager books, again and again. Magic or Not, and Half Magic, and Knight’s Castle, and still love them–they are truly still wonderful. The Mushroom Planet! Diamond in the Window by Jane Langton, my very very favorite. My parents lost me for an entire month as I devoted my life to reading all the Sherlock Holmes short stories and novellas. Agatha Christie—what a revelation! Brilliant. Life-changing. I was hooked. So I moved from that to the other Golden Age mysteries, Ngaio Marsh and Josephine Tey and Dorothy Sayers. Whoa. And I fell in love, forever love, with mysteries. As a teenager, though, I was a thriller reader—Seven Days in May, Fail Safe, Alas Babylon, The Manchurian Candidate, On the Beach. And I sneaked Marjorie Morningstar.

LESA: I’ll end with a question I can always ask, because book piles change. What’s on your current TBR pile?

HANK: Ah. I’m judging for a contest so I cannot tell you. Trust Me. But my TBR is a dangerous thing. Isn’t yours?

Hank’s right. My TBR pile is dangerous, and I hope you’re going to be adding Trust Me to your own To Be Read pile. 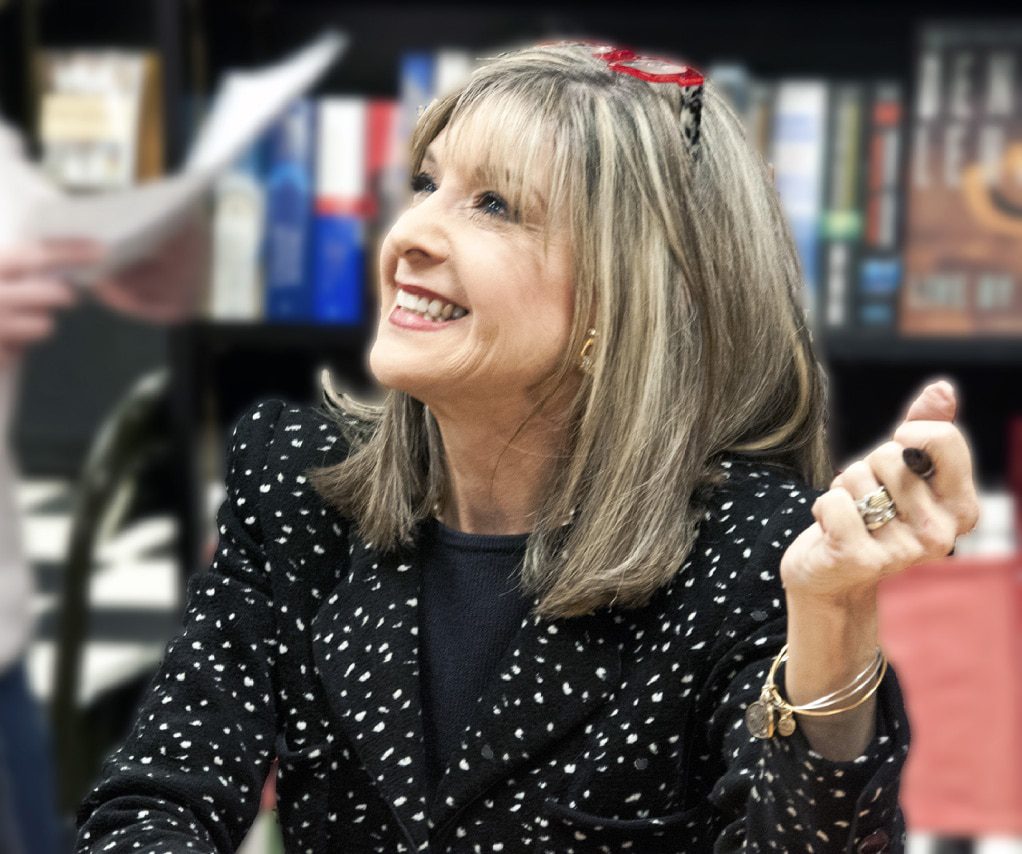 An obsessed journalist. A suburban mom.  Two strong women face off and a high-stakes cat and mouse game to prove their truth about a terrible crime. But which one is the cat, and which one is the mouse?  Only one can prevail. We dare you to find the liar. 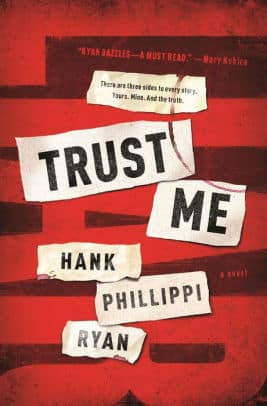