Amos Decker, the Memory Man, is back in David Baldacci’s The Fallen. The Fallen is the current Hot Book of the Week at the Poisoned Pen. You can order a signed copy of it through the Web Store. https://bit.ly/2HvV1oG 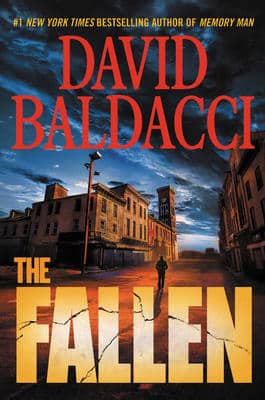 Here’s the description of The Fallen.

Amos Decker is the Memory Man. Following a football-related head injury that altered his personality, Decker is now unable to forget even the smallest detail–as much a curse as it is a blessing. And in #1 New York Times bestselling author David Baldacci’s gripping new thriller, Decker’s life might be about to change again…

Something sinister is going on in Baronville. The rust belt town has seen four bizarre murders in the space of two weeks. Cryptic clues left at the scenes–obscure bible verses, odd symbols–have the police stumped.

Amos Decker and his FBI colleague Alex Jamison are in Baronville visiting Alex’s sister and her family. It’s a bleak place: a former mill and mining town with a crumbling economy and rampant opioid addiction. Decker has only been there a few hours when he stumbles on a horrific double murder scene.

Then the next killing hits sickeningly close to home. And with the lives of people he cares about suddenly hanging in the balance, Decker begins to realize that the recent string of deaths may be only one small piece of a much larger scheme–with consequences that will reach far beyond Baronville.

Decker, with his singular talents, may be the only one who can crack this bizarre case. Only this time–when one mistake could cost him everything–Decker finds that his previously infallible memory may not be so trustworthy after all…

“Decker is one of the most unusual detectives any novelist has dreamed up.” –-Washington Post