Because Barbara Mertz, who wrote under the name Elizabeth Peters, became ill and died in 2013, she was never able to finish the last Amelia Peabody mystery, The Painted Queen. Her good friend, Joan Hess, did finish writing the novel. 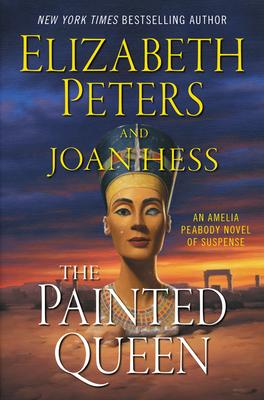 You can order a copy through the Web Store. https://bit.ly/2uGm71H

Egypt, 1912—Amelia Peabody and her dashing archeologist husband, Radcliffe Emerson, are once again in danger as they search for a priceless, stolen bust of legendary Queen Nefertiti and Amelia finds herself the target of assassins in this long-awaited, eagerly anticipated final installment of Elizabeth Peters’ bestselling, beloved mystery series.

Arriving in Cairo for another thrilling excavation season, Amelia is relaxing in a well-earned bubble bath in her elegant hotel suite in Cairo, when a man with knife protruding from his back staggers into the bath chamber and utters a single word—”Murder”—before collapsing on the tiled floor, dead. Among the few possessions he carried was a sheet of paper with Amelia’s name and room number, and a curious piece of pasteboard the size of a calling card bearing one word: “Judas.” Most peculiarly, the stranger was wearing a gold-rimmed monocle in his left eye.

It quickly becomes apparent that someone saved Amelia from a would-be assassin—someone who is keeping a careful eye on the intrepid Englishwoman. Discovering a terse note clearly meant for Emerson—Where were you?”—pushed under their door, there can be only one answer: the brilliant master of disguise, Sethos.

But neither assassins nor the Genius of Crime will deter Amelia as she and Emerson head to the excavation site at Amarna, where they will witness the discovery of one of the most precious Egyptian artifacts: the iconic Nefertiti bust. In 1345 B.C. the sculptor Thutmose crafted the piece in tribute to the great beauty of this queen who was also the chief consort of Pharaoh Akhenaten and stepmother to King Tutankhamun.

For Amelia, this excavation season will prove to be unforgettable. Throughout her journey, a parade of men in monocles will die under suspicious circumstances, fascinating new relics will be unearthed, a diabolical mystery will be solved, and a brilliant criminal will offer his final challenge . . . and perhaps be unmasked at last.

The Painted Queen is on The New York Times Bestseller List. Gregory Cowles discussed the book in the column, “Inside the List”. https://nyti.ms/2huYtnN