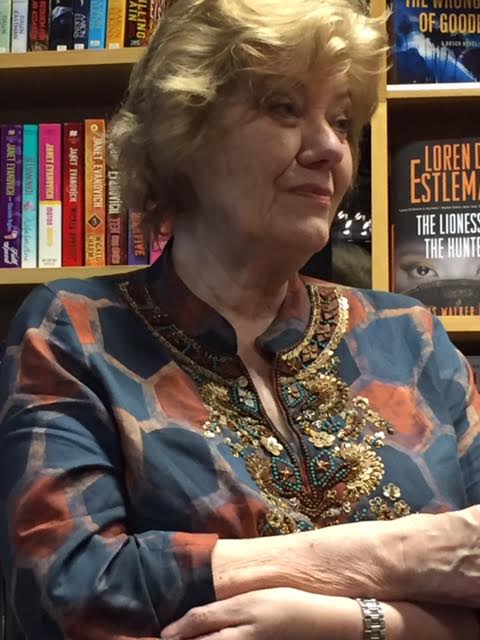 It was a free-flowing conversation when Anne Perry appeared at The Poisoned Pen to discuss her thirty-second Thomas & Charlotte Pitt mystery, Murder on the Serpentine. Poisoned Pen Bookstore owner Barbara Peters interviewed her, and the conversation wandered to a number of related subjects. 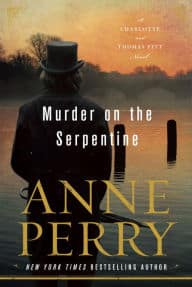 Thomas Pitt, who is now commander of Special Branch, is asked to take a special assignment by Queen Victoria, who is in the last years of her reign. The assignment puts Thomas in a difficult position. He can’t go home and talk to Charlotte about the case now that he’s head of the anti-terrorist force. Charlotte has to do a work around with Emily in order to find out information. Perry said Emily is made for deviousness. Lady Vespasia is currently on her honeymoon with Victor, so they are not available for advice or assistance. Perry deliberately sent Victor out of the country so Pitt had to work on the investigation by himself.

Perry said this book poses a moral question, whether you will do something repugnant to you to fulfill a duty ““ your job ““ going against your better nature to save the country. It’s something Thomas would rather not do, but must. The danger is very real.

After Prince Albert’s death, there was a great deal of tension between Queen Victoria and the Prince of Wales. Victoria has always been fun, but Albert was a prude. While at Cambridge, Bertie had a fling with an actress. Although Albert was sick, he went to scold him despite the terrible weather, and he died soon after. Victoria blamed Edward for his father’s death. She wouldn’t let him participate in government until just before she died. However, the Germans were fond of him and his libertine behavior.

Edward had a penchant for friends who were not quite appropriate, not just women. In Murder on the Serpentine, Victoria was concerned about one of Bertie’s new friends. She asked a trusted friend to look into the man’s background, and her friend ended up dead. She was concerned she had sent him to his death. Was it an accident or murder? Here’s a woman who has outlived most of her the people she loved. She’s fragile. She’s been the Queen since she was nineteen. Can Thomas tell her the truth? She asks to see him, and personally asks him to investigate.

The book also deals with armaments, and the fear of a second Boer War.

And, there’s some of the bitchiest dialogue between women in some of Perry’s scenes. It’s cruel, but said with a smile. Perry said there’s elegance in the faÃ§ade of British society.

Asked if she was writing anything else, Perry said she wants to write an international thriller set in the 1930s in Berlin. There’s so many things she’d like to do. She’s doing the final edit of the Daniel story. Daniel is the son of Thomas and Charlotte Pitt. The book is set in 1910. Perry said she can only work all the time. She can’t do any more. She does her best work in the morning when she’s sharpest. Afternoon work isn’t as good.

Perry and Peters discussed Anne Perry’s recent move from Scotland to West Hollywood. She said she couldn’t take her all of her books. She only took thirty, most of them poetry. She loves Dante’s Inferno. He said, “You’re not punished for your sins, but by your sins.” There was a lengthy discussion of the alphabet when she mentioned a history of the alphabet book. If language isn’t written, that civilization is lost.

There were conversations about World War II, language, laundry, Princess Margaret, war memorials, the RAF and British pilots in the United States. Barbara Peters said the conversations at The Poisoned Pen often contain lengthy digressions because they can’t talk about the books for more than five or ten minutes because people haven’t yet read it. Anne Perry said she loves to talk with the readers, though, and take their questions. She likes to know what readers are thinking. She writes to communicate stories to the readers.

Peters said she often asks authors who their readers are. Who is their audience? When she said Anne Perry knows her readers, Perry said, “A lot of retired English teachers and librarians.” Also clergy and nuns.

Anne Perry said she’s editing an anthology for Mystery Writers of America. She picked the topic of odd couples ““ detectives who pair up with someone in an unlikely pairing. For instance, Charles Todd wrote about Ian Rutledge and his ghost.

If you would like to order a signed copy of Anne Perry’s Murder on the Serpentine, check the Web Store. https://bit.ly/2miY2yR