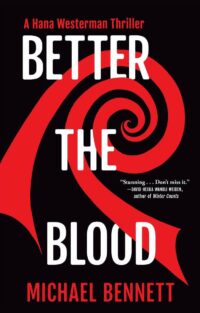 Barbara Peters, owner of The Poisoned Pen, welcomed New Zealand author Michael Bennett to talk about his debut thriller, Better the Blood. If you watch the event, Bennett talks about his family involvement in the production of the book. You can order a copy of Better the Blood through the Web Store. https://store.poisonedpen.com/item/wLu_br6H3tUtq22IznQevw

Here’s the summary of Better the Blood.

An absorbing, clever debut thriller that speaks to the longstanding injustices faced by New Zealand’s indigenous peoples, by an acclaimed M?ori screenwriter and director

A tenacious M?ori detective, Hana Westerman juggles single motherhood, endemic prejudice, and the pressures of her career in Auckland CIB. Led to a crime scene by a mysterious video, she discovers a man ritualistically hanging in a secret room and a puzzling inward-curving inscription. Delving into the investigation after a second, apparently unrelated, death, she uncovers a chilling connection to an historic crime: 160 years before, during the brutal and bloody British colonization of New Zealand, a troop of colonial soldiers unjustly executed a M?ori Chief.

Hana realizes that the murders are utu—the M?ori tradition of rebalancing for the crime committed eight generations ago. There were six soldiers in the British troop, and since descendants of two of the soldiers have been killed, four more potential murders remain. Hana is thus hunting New Zealand’s first serial killer.

The pursuit soon becomes frighteningly personal, recalling the painful event, two decades before, when Hana, then a new cop, was part of a police team sent to end by force a land rights occupation by indigenous peoples on the same ancestral mountain where the Chief was killed, calling once more into question her loyalty to her roots. Worse still, a genealogical link to the British soldiers brings the case terrifyingly close to Hana’s own family. Twisty and thought-provoking, Better the Blood is the debut of a remarkable new talent in crime fiction.

Michael Bennett (Ng?ti Pikiao, Ng?ti Whakaue) is an award-winning screenwriter, director, and author whose films have been selections at major festivals, including Cannes, Berlin, Toronto, and New York. His nonfiction book, In Dark Places, which explored an infamous miscarriage of justice, won awards, and his young adult graphic novel, Helen and the Go-Go Ninjas, was a finalist for the 2019 New Zealand Book Awards.