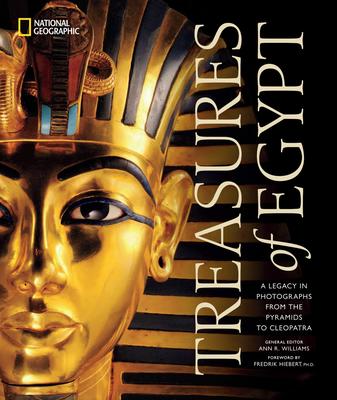 Barbara Peters, owner of The Poisoned Pen Bookstore, welcomed back Ann Williams, the editor of National Geographic.She came back to discuss Treasures of Egypt, a book that Peters is recommending for Christmas. You’ll want to order a copy as soon as possible to ensure it gets there by Christmas. Here’s the link to the Web Store. https://bit.ly/3B5J6bx

Here’s the description of Treasures of Egypt.

Drawing from National Geographic’s unparalleled photo archive, the images in this breathtaking volume celebrate the vibrant beauty and rich cultural heritage of Egypt on the 100th anniversary of the discovery of King Tut’s tomb.

Egypt’s rich history astonishes us again and again with priceless treasures, exquisite craftsmanship, and a bounty of artifacts that enables us to envision the past with extraordinary detail. It is an epic saga 5,000 years in the making, and one that National Geographic has covered for more than a century.

This magnificent book, published to celebrate the 100th anniversary of the discovery of King Tut’s tomb, portrays the hallowed country’s most remarkable achievements, viewed through decades of discovery chronicled in National Geographic magazine. From the breathless opening of King Tut’s tomb in 1922 to the astonishing find of perfectly preserved boats, entombed for eternity near Giza’s pyramids, here is the story of a proud and dynamic empire that changed the world; its colossal architecture and imposing statues force us to re-think the engineering limitations of the world before modern tools were available.

Documenting a series of incredible discoveries—including a complex of royal graves filled with dazzling gold artifacts at the ancient city of Tanis, intriguing clues to the life and times of Cleopatra, and newly uncovered traces of Alexandria, Abydos, and other fabled sites—Treasures of Egypt embodies the culture’s most fascinating historical milestones. Filled with vivid photographs, revealing time lines, and profiles of major explorers in the field, this exquisite book will inform and inspire.

General Editor ANN R. WILLIAMS specializes in writing about the ancient world and cultural heritage preservation. As a writer for three decades at National Geographic magazine and digital news, she reported on new discoveries and the latest research in archaeology around the world. She lives in Silver Spring, Maryland.

If you’re interested in Egyptian culture or King Tut, you’ll want to watch this discussion.