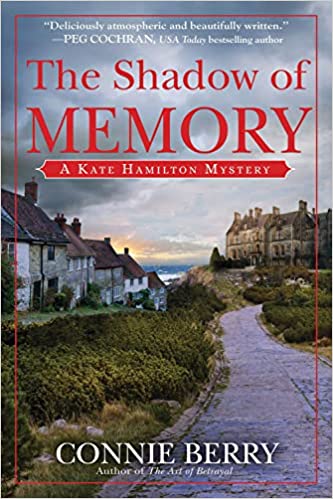 Have you “met” Connie Berry, author of the Kate Hamilton mysteries? The latest one is The Shadow of Memory, which I’ll introduce later. In the meantime, let me introduce Connie before she discusses her “Pandemic books”.

Connie Berry is the author of the Kate Hamilton Mysteries, set in the UK and featuring an American antiques dealer with a gift for solving crimes. Like her protagonist, Connie was raised by antiques dealers who instilled in her a passion for history, fine art, and travel. During college she studied at the University of Freiburg in Germany and St. Clare’s College, Oxford, where she fell under the spell of the British Isles. In 2019 Connie won the IPPY Gold Medal for Mystery and was a finalist for the Agatha Award’s Best Debut. She’s a member of Mystery Writers of America and is on the board of the Guppies and her local Sisters in Crime chapter. Besides reading and writing mysteries, Connie loves history, foreign travel, cute animals, and all things British. She lives in Ohio with her husband and adorable Shih Tzu, Emmie. You can learn more about Connie and her books at her website https://www.connieberry.com

You can find her books, and her book suggestions, through the Web Store. https://store.poisonedpen.com/

Everyone knows how stressful the pandemic years were—isolation from family and friends, confusion over conflicting information, the reordering of common tasks, and most of all, dealing with the unknown. During that time, I turned to the comfort of old book friends plus new books by authors whose work was familiar to me. When I couldn’t travel, I escaped to worlds where the pandemic didn’t exist. In fact, I read more books than ever during that time. Here are five of my favorites.

A Line To Kill by Anthony Horowitz is the third in the Detective Hawthorne series and, in my opinion, the best so far. Ex-Detective Inspector Daniel Hawthorne and his Captain-Hastings-like chronicler, Anthony Horowitz (yes, the author writes himself into the story) are invited to a literary festival on the tiny Channel island of Alderney. When a local peer is murdered and the island is locked down, Hawthorne and his sidekick must find the killer hiding in plain sight. With a bizarre murder, a limited number of suspects, and a classic puzzle-plot, Horowitz evokes the finest traditions of the Golden Age—with a modern twist.

The Darkest Evening by Ann Cleeves is the ninth in the Vera Stanhope series. I binged on Vera during the pandemic, devouring both the novels and the long-running television series starring Brenda Blethyn. The Darkest Evening combines a cracking mystery with an intriguing glimpse into Vera’s troubled past. Set in Northumberland in December, the book begins when prickly Detective Inspector Vera Stanhope becomes lost on a snowy country road and finds an abandoned car with its doors open. In the rear seat is a toddler, nearly frozen and strapped into a car seat. Where is the child’s mother, and why would she leave her child behind? Vera rushes the child to nearby Brockburn, the once-grand house where her father, Hector, grew up. A Christmas party is in full swing, and Vera’s relatives, whom she hasn’t seen in years, aren’t exactly chuffed. As the police launch an investigation into the identity of the child and the whereabouts of its mother, Vera learns uncomfortable truths about her family history. I loved the mystery, but it’s the character of Vera that keeps me coming back for more.

A Surprise for Christmas and Other Seasonal Mysteries,edited by Martin Edwards, is a collection of twelve short stories by such masters as GK Chesterton, Ngaio Marsh, Carter Dickson, Margery Allingham, and Cyril Hare (one of my all-time favorites). Each is a jewel in its own right, but my favorite is “Persons or Things Unknown,” first published in 1938 by Carter Dickson, pen-name of John Dickson Carr (1906 – 1977). Carr loved history (as I do) and specialized in ingenious locked-room mysteries. This story is set in a country house in Sussex where, in the 1760s, a local farmer was stabbed to death in a locked room with an invisible knife. Can the Assistant Commissioner of the Metropolitan Police, a guest at the country house, solve the case almost two hundred years after the crime was committed?

The Complete Mapp & Lucia, Volumes 1 and 2, include six comic novels published by E. F. Benson between 1920 and 1939. The small, fictional seaside village of Tilling is the scene of a battle for social dominance between the pretentious and domineering Mrs. Emmeline Lucas (known by her friends as Queen Lucia) and the devious and manipulative Miss Elizabeth Mapp. Lucia’s friend Georgie Pillson and the Tillingites—Diva Plaistow, Major Benji Flint, Mr. and Mrs. Wyse, the Padre and his wife, and Quaint Irene—takes various sides as the tide of battle swings back and forth. Frivolous? Yes, as only British comedy can be. But these gentle satires on human frailty have always been one of my cures when reality becomes a bit too stressful. Like the novels by P. G. Wodehouse, they never get old.

Castle Shade by Laurie R. King is the seventeenth book in the Mary Russell/Sherlock Holmes series. Russell and Holmes travel to Castle Bran in Transylvania to help Queen Marie of Roumania, a famous beauty and the granddaughter of both Queen Victoria and the Russian Tsar, Alexander II. The Queen is adored by her subjects, but a series of vague threats, strange accidents, and the disappearance of a young woman hint at an enemy that might not be exactly human. King weaves a suspenseful tale of history, folklore, old secrets, and…vampires?  While this wasn’t my all-time favorite in the series, spending time in the company of Mary and Sherlock was pure pleasure—and the intriguing associations of Bran Castle and Transylvania added layers of intrigue.

I warned Connie Berry that if she didn’t mention her latest Kate Hamilton, I’d write about it. She’s okay with that, but I’m actually using the summary on The Poisoned Pen’s web page. Berry gets better with each book, and The Shadow of Memory is my favorite in the series, so far.

As Kate Hamilton plans her upcoming wedding to Detective Inspector Tom Mallory, she is also assisting her colleague Ivor Tweedy with a project at the Netherfield Sanatorium, which is being converted into luxury townhouses. Kate and Ivor must appraise a fifteenth-century paintingand verify that its provenance is the Dutch master Jan Van Eyck. But when retired criminal inspector Will Parker is found dead, Kate learns that the halls of the sanatorium housed much more than priceless art.

Kate is surprised to learn that Will had been the first boyfriend of her friend Vivian Bunn, who hasn’t seen him in fifty-eight years. At a seaside holiday camp over sixty years ago, Will, Vivian, and three other teens broke into an abandoned house where a doctor and his wife had died under bizarre circumstances two years earlier. Now, when a second member of the childhood gang dies unexpectedly—and then a third—it becomes clear that the teens had discovered more in the house than they had realized.

Had Will returned to warn his old love? When Kate makes a shocking connection between a sixty-year-old murder and the long-buried secrets of the sanatorium, she suddenly understands that time is running out for Vivian—and anyone connected to her.