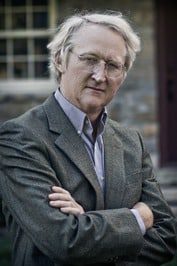 Eliot Pattison, author of the Bone Rattler series and the Inspector Shan Too Yun series, is guest author today. Copies of his books, including the latest in both series, The King’s Beast and Bones of the Earth, can be found in the Web Store. https://bit.ly/3xCqixg

PATTISON is the author of the Inspector Shan series, which includes The Skull Mantra, winner of an Edgar Award and finalist for the Gold Dagger. He is also the author of the Bone Rattler series.. Pattison resides in rural Pennsylvania with his wife, son, three horses, and three dogs on a colonial-era farm. Find out more at eliotpattison.com.

It’s always timely to talk about the mystery genre.

The Genre Made for Discovery

Years ago at a bookstore event in Boston, a reader very sincerely asked “you are such a good writer, why don’t you write real novels?” I choked down my immediate reaction, wondering where she had acquired such confidence that mysteries have no literary value, and simply replied that every good novel I could think of had a mystery at its heart. From time to time I contemplate that long ago comment, and think about how perspectives of the mystery genre have evolved over time. I am old enough to have heard a prior generation speak somewhat disparagingly about “dime novels,” and I recall shelves and boxes of these dusty pulp mysteries in my grandparents’ attics. These hearkened back to a time when such books were one of the very first mass market phenomena, so inexpensive and accessible that they attracted crowds of new readers—becoming an important benchmark in the evolution of the genre..

This evolution offers intriguing insights into the shaping of society generally. The arc of the genre from Poe to Arthur Conan Doyle and on to pulp fiction bears a correlation to the expansion of both literacy and leisure time. This liberation of new readers, chained to neither broadcast entertainment nor social media, brought an explosion in sales of mysteries. Publishers had to recalibrate, and rapidly expand. The Nick Carter detective franchise, for example, became an industry unto itself, generating 250 novels written by a dozen different novelists. These printing presses were driven by quantity, not quality, and it is no surprise that literary circles of the day treated their output with some disdain. Even Dashiell Hammett, who contributed at the higher end of the niche, later in life confessed that “I’ve been as bad an influence on American literature as anyone I can think of.”

The paradigms, and prejudices, formed during this era seem to still shadow the genre, but only because they haven’t caught up with the richness of contemporary mystery offerings. There’s a reason why the genre has become the second highest selling segment in America (and the top selling in Britain), and it’s not because readers’ tastes have been dumbed down. Rather the quality and depth of the offering have steadily increased. At one time the literary mystery was an outlier that confounded critics. A generation ago Umberto Eco’s The Name of the Rose was hailed for its literary prowess but commentaries on the novel almost never used the term “mystery” to describe it, even though its plot revolved around the resolution of graphic, symbolic murders. Today booksellers can readily offer up “literary mysteries” and more than a few such novels have been finalists for literary awards. There is of course no strict definition of a literary mystery, a topic I have tested through the years. Apart from the unhelpful but frequent “I know it when I see it” response there is general agreement that it involves deeper development of character and setting than in traditional detective or police procedural tales. I admit these are important, and deliberate, elements of my own novels, but there is also something more ethereal that drives my commitment to the genre. Mystery readers are on a moral quest. Traditional mysteries guide their readers along a linear path to a resolution of moral clarity, offering reassuring order to readers increasingly suffering through a disorderly world. I believe, however, that more and more mystery readers are seeking the quest as much as the resolution. They are approaching their novels with an aggressive inquisitiveness, which in my case allows me to lead them into worlds they haven’t known before, into perspectives and human ordeals never before experienced. They may be bound together by a common quest for justice but learn, often painfully, that when viewed across cultures—and sometimes across time–justice itself can have many dimensions. I don’t want my readers to simply experience a satisfying jolt of righteousness, I want them to discover questions they never thought to ask. Mysteries are the perfect genre for doing so.

Here’s the description of The King’s Beast.

A simple task to retrieve some artifacts turns into a nightmare of deceit when Duncan McCallum finds himself the target of those obsessed with keeping America under British rule in this thrilling historical novel from an Edgar Award-winning author.

When Duncan McCallum is asked by Benjamin Franklin to retrieve an astonishing cache of fossils from the Kentucky wilderness, his excitement as a naturalist blinds him to his treacherous path. But as murderers stalk him Duncan discovers that the fossils of this American incognitum are not nearly as mysterious as the political intrigue driving his mission. The Sons of Liberty insist, without explaining why, that the only way to keep the king from pursuing a bloody war with America is for Duncan to secretly deliver the fossils to Franklin in London.

His journey becomes a maze of deceit and violence as he seeks the cryptic link between the bones and the king. Every layer that Duncan peels away invites new treachery by those obsessed with crushing American dissent. With each attempt on his life, Duncan questions the meaning of the liberty he and the Sons seek. His last desperate hope for survival, and the rescue of his aged native friend Conawago, imprisoned in Bedlam, requires the help of freed slaves, an aristocratic maiden, a band of street urchins, and the gods of his tribal allies.