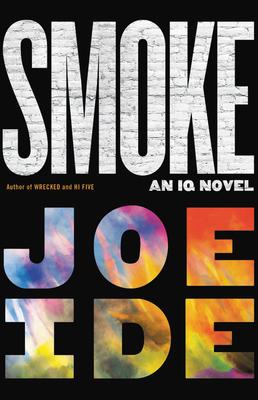 Patrick Millikin from The Poisoned Pen told author Joe Ide that Smoke, the fifth IQ novel, might be his favorite. There were still a few signed copies left at the time of the recent virtual event to celebrate the publication of the latest novel. You can order Ide’s books through the Web Store. https://bit.ly/2NXfw1n

Here’s the story of Smoke.

Isaiah Quintabe—an unlicensed detective for all seasons—and his best friend and masterful sidekick, Juanell Dodson, are at a crossroads in this latest installment of the “aggressively entertaining” IQ series (New York Times). This time, their lives may never be the same.

Isaiah Quintabe is no longer IQ, the genius of East Long Beach; instead, he’s a man on the road and on the run, hiding in a small Northern California town when his room is broken into by a desperate young man on the trail of the state’s most prolific serial killer.

His old partner, Juanell Dodson, must go straight or lose his wife and child. His devil’s bargain? An internship at an LA advertising agency, where it turns out the rules of the street have simply been dressed in business casual, but where the aging company’s fortunes may well rest on their ability to attract a younger demographic. Dodson—”the hustler’s hustler”—just may be the right man for the job.

Ide is the crime writer’s crime writer, and he’s filled his best novel yet with desperate souls, courageous outcasts, an ex-stripper who’ll do anything to protect her son, and wild half-brothers who may be the very incarnation of evil.

With deft plotting, lacerating humor, and a keen eye for the ways in which characters rise or fall based on their ties to one another, Smoke is Joe Ide’s crowning achievement.

Joe Ide is of Japanese American descent. Growing up in South Central Los Angeles, Joe’s favorite books were the Conan Doyle Sherlock Holmes stories. The idea that a person could face the world and vanquish his enemies with just his intelligence fascinated him. Joe went on to earn a graduate degree and had several careers before writing his debut novel, IQ, inspired by his early experiences and his love of Sherlock Holmes. Joe lives in Santa Monica, California.