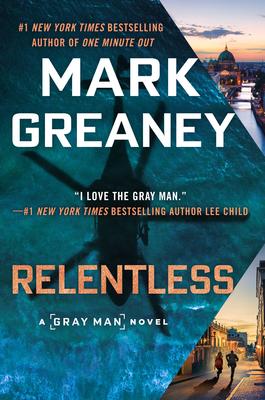 The Poisoned Pen held a virtual book release and surprise party for Mark Greaney’s new Gray Man thriller, Relentless. Relentless is the Hot Book of the Week at The Poisoned Pen, and you can still order a signed copy through the Web Store. https://bit.ly/2o92azg

Before I share the surprise for Mark Greaney, here’s the summary of Relentless.

The Gray Man’s search for missing intelligence agents plunges him deep into a maelstrom of trouble in the latest entry in the #1 New York Times bestselling series.

The first agent disappearance was a puzzle.

The second was a mystery.

The third was a conspiracy.

Intelligence operatives around the world are disappearing. When a missing American agent re-appears in Venezuela, Court Gentry, the Gray Man, is dispatched to bring him in, but a team of assassins has other ideas. Court escapes with his life and a vital piece of intelligence.

Meanwhile, CIA agent Zoya Zakharova is in Berlin. Her mission: to infiltrate a private intelligence firm with some alarming connections. The closer she gets to answers, the less likely she is to get out alive.

Court and Zoya are just two pieces on this international chessboard, and they’re about to discover one undeniable truth—sometimes capturing a king requires sacrificing some pawns.

Mark Greaney has a degree in international relations and political science. In his research for the Gray Man novels, including One Minute Out, Mission Critical, Agent in Place, Gunmetal Gray, Back Blast, Dead Eye, Ballistic, On Target, and The Gray Man, he traveled to more than fifteen countries and trained alongside military and law enforcement in the use of firearms, battlefield medicine, and close-range combative tactics. With Marine LtCol Rip Rawlings, he wrote the New York Times bestseller Red Metal. He is also the author of the New York Times bestsellers Tom Clancy Support and Defend, Tom Clancy Full Force and Effect, Tom Clancy Commander in Chief, and Tom Clancy True Faith and Allegiance. With Tom Clancy, he coauthored Locked On, Threat Vector, and Command Authority.

If you watch the video, you’ll get a chance to join in on the surprise. Mark Greaney celebrates the release of his 20th book (and 10th Gray Man novel), RELENTLESS, with a star-studded group of guest authors: Don Bentley, Marc Cameron, Jack Carr, Joshua Hood and Brad Taylor.