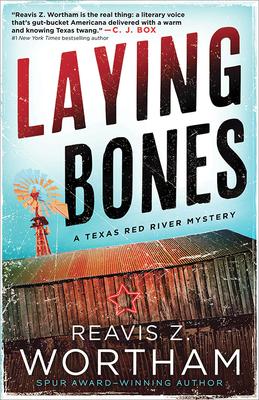 Here’s the summary of Laying Bones.

The stakes don’t get much higher than murder…

It’s January 1969 in the small rural community of Center Springs, Texas. Constable Ned Parker suspects a larger mystery behind the seemingly accidental death of his nephew, R .B., who was found in his overturned pickup near Sanders Creek bridge. It appears that R. B. drowned in the shallow water, but something doesn’t add up for Ned, who begins turning over stones in search of what really happened the night R. B. died.

The mystery leads Ned to the Starlite Club, a dangerous honky-tonk recently constructed in a no-man’s land on the Lone Star side of the Red River. His investigations there uncover suspicious characters, drugs, and gambling, but even more troubling are a series of murders that seem designed to eliminate anyone who might know what really happened to R. B. on that cold January night.

As he works his way through the cover-up, Ned lands himself in a high-stakes game of consequences with no good end in sight. Are the good citizens of Center Springs conspiring against Constable Parker in his search for the truth?

In this thrilling addition to the historical Texas Red River Mystery Series, Constable Ned Parker bets big, but only time will tell if he’ll win justice or a grave of his own.

You can tell Reavis Z. Wortham and Joe R. Lansdale enjoy each other’s company. All you have to do is read Michael Barson’s interview with Wortham in Bookreporter. When asked about his favorite Texas novelists, Wortham mentions Lansdale among others. Here’s that interview. https://bit.ly/3ippRiM

Here’s the conversation about writing with Wortham and Lansdale.