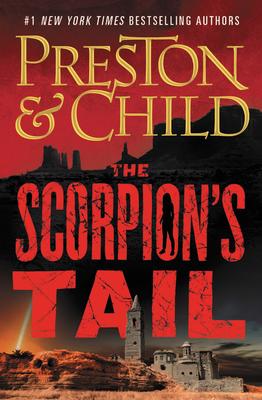 The latest book in the Nora Kelly series by Douglas Preston and Lincoln Child is The Scorpion’s Tail. As Barbara Peters, owner of The Poisoned Pen, says, there are still some signed copies available, but the bookstore always sells out. So, order your copy now, while you can still get a signed book. You can order them through the Web Store. https://bit.ly/2us95e9

Here’s the summary of The Scorpion’s Tail.

A mummified corpse, over half a century old, is found in the cellar of an abandoned building in a remote New Mexico ghost town. Corrie is assigned what seems to her a throwaway case: to ID the body and determine cause of death. She brings archaeologist Nora Kelly to excavate the body and lend her expertise to the investigation, and together they uncover something unexpected and shocking: the deceased apparently died in agony, in a fetal position, skin coming off in sheets, with a rictus of horror frozen on his face.

When they at last identify the body — and the bizarre cause of death — Corrie and Nora open a door into a terrifying, secret world of ancient treasure and modern obsession: a world centered on arguably the most defining, frightening, and transformative moment in American history.

You’ll want to watch the virtual event because the authors provide the stories behind the two Nora Kelly books.