Liam Callanan hosts Cara Black, author of the Aimee Leduc Investigations, on Thursday, June 21 at 7 PM. Signed copies of Black’s eighteenth mystery in the series, Murder on the Left Bank, are available through the Web Store. https://bit.ly/2IYOeVY 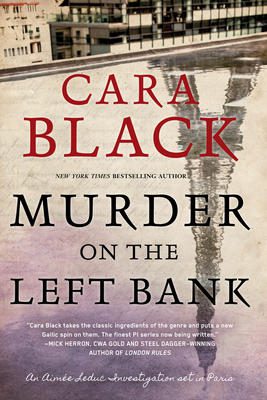 Here’s the summary of Murder on the Left Bank.

A dying man drags his oxygen machine into the office of Ã‰ric Besson, a lawyer in Paris’s 13th arrondissement. The old man, an accountant, is carrying a dilapidated notebook full of meticulous investment records. For decades, he has been helping a cadre of dirty cops launder stolen money. The notebook contains his full confession—he’s waited 50 years to make it, and now it can’t wait another day. He is adamant that Besson get the notebook into the hands of La Proc, Paris’s chief prosecuting attorney, so the corruption can finally be brought to light. But en route to La Proc, Besson’s courier—his assistant and nephew—is murdered, and the notebook disappears.

Grief-stricken Ã‰ric Besson tries to hire private investigator AimÃ©e Leduc to find the notebook, but she is reluctant to get involved. Her father was a cop and was murdered by the same dirty syndicate the notebook implicates. She’s not sure which she’s more afraid of, the dangerous men who would kill for the notebook or the idea that her father’s name might be among the dirty cops listed within it. Ultimately that’s the reason she must take the case, which leads her across the Left Bank, from the Cambodian enclave of Khmer Rouge refugees to the ancient royal tapestry factories to the modern art galleries.

Recently, Cara Black’s publisher put together a guide to the series. It’s a fascinating look at the setting and stories. Even if you’re up-to-date with the mysteries, you’ll want to check it out. https://www.discovermysteries.com/black/