If you did, you had a sneak peek and a little background for Scottoline’s New York Times bestseller, After Anna. Signed copies are still available in the Web Store. https://bit.ly/2qOXXCb 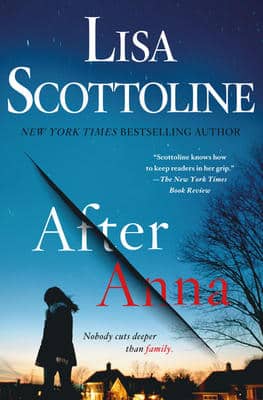 Here’s the summary of After Anna.

Nobody cuts deeper than family…

Dr. Noah Alderman, a widower and single father, has remarried a wonderful woman, Maggie Ippolitti, and for the first time in a long time, he and his young son are happy. Despite her longing for the daughter she hasn’t seen since she was a baby, Maggie is happy too, and she’s even more overjoyed when she unexpectedly gets another chance to be a mother to the child she thought she’d lost forever, her only daughter Anna.

Maggie and Noah know that having Anna around will change their lives, but they would never have guessed that everything would go wrong, and so quickly. Anna turns out to be a gorgeous seventeen-year-old who balks at living under their rules, though Maggie, ecstatic to have her daughter back, ignores the red flags that hint at the trouble brewing in a once-perfect marriage and home.

Events take a heartbreaking turn when Anna is murdered and Noah is accused and tried for the heinous crime. Maggie must face not only the devastation of losing her daughter, but the realization that Anna’s murder may have been at the hands of a husband she loves. In the wake of this tragedy, new information drives Maggie to search for the truth, leading her to discover something darker than she could have ever imagined.

Riveting and disquieting,After Anna is a groundbreaking domestic thriller, as well as a novel of emotional justice and legal intrigue. And New York Times bestselling author Lisa Scottoline will keep readers on their toes until the final shocking page

“Scottoline keeps the pace relentlessas she drops a looming threat into the heart of an idyllic suburban community, causing readers to hold their breath in anticipation.” —BooklistonOne Perfect Lie

“Readers can be assured that the author nails the high school milieu, from athletic rivalries to sexting…they’re in for one thrilling ride.” —KirkusonOne Perfect Lie

“Entertaining…Thisfast-paced read culminates in a daring chase that would play well on the big screen.” —Publishers Weekly

And, you’ll definitely want to review Tina Jordan’s article in The New York Times. After Anna debuts at number two on the bestselling list. Jordan’s article is called, “This Bestselling Author Lives With 4 Dogs, 17 Chickens, 3 Horses, a Pony, and a Cat.” https://nyti.ms/2K3NZ8O