Joe R. Lansdale recently appeared at The Poisoned Pen where he discussed his latest Hap and Leonard novel, Jackrabbit Smile, with Patrick Millikin. Now, you can order a signed copy of Jackrabbit Smile through the Web Store. https://bit.ly/2GAlHEV 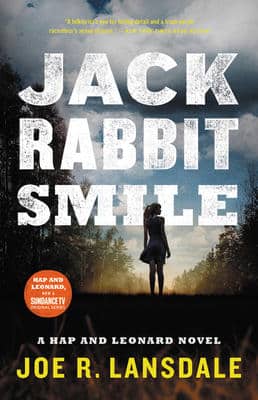 And, you can also enjoy listening to Lansdale tell stories if you watch the program on Livestream. https://livestream.com/poisonedpen/events/8144174 I don’t think you’re going to want to miss this.

Here’s the description of Jackrabbit Smile.

Edgar Award-winner and fan favorite Joe R. Lansdale is back with Hap and Leonard’s latest caper: investigating the disappearance of a revivalist cult leader’s daughter.

Hap and Leonard are an unlikely pair-Hap, a self-proclaimed white trash rebel, and Leonard, a tough-as-nails black gay Vietnam vet and Republican-but they’re the closest friend either of them has in the world. Hap is celebrating his wedding to his longtime girlfriend, Brett (who is also Hap and Leonard’s boss), when their backyard barbecue is interrupted by a couple of Pentecostal white supremacists. They’re not too happy to see Leonard, and no one is happy to see them, but they have a problem and only Hap and Leonard will take the case.

Judith Mulhaney’s daughter, Jackrabbit, has been missing for five years. Well, she’s been missing from them for five years, but she’s been missing from everybody, including the local no-goods who ran with her, for a few months. Despite their misgivings about Judith and her son, Hap and Leonard take the case. It isn’t long until they find themselves mixed up in a revivalist cult that believes Jesus will return flanked by an army of lizard-men– solving a murder to boot.
With Lansdale’s trademark humor, whip-smart dialogue, and plenty of ass-kicking adventures to be had, you won’t want to miss Hap and Leonard’s latest.
*****