As I recently mentioned, Donis Casey will be at the Poisoned Pen on Saturday, February 24 at 2 PM, joining fellow authors Dennis Palumbo and Priscilla Royal. Casey is the author of the Alafair Tucker mysteries. Her latest one is Forty Dead Men. 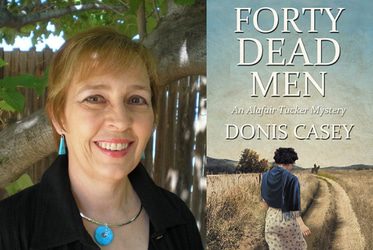 Signed copies of Forty Dead Men are available in the Web Store. https://bit.ly/2F9BIwo

Some people who have experienced a shocking, dangerous, or terrifying event develop Post Traumatic Stress Disorder. It is recognized today as a debilitating but potentially treatable mental health condition. Military veterans are a vulnerable group. But PTSD can deliver a knockout blow to anyone, as the remarkable unfolding of the tenth Alafair Tucker Mystery, Forty Dead Men, shows.

World War I is over. Alafair is overjoyed that her elder son, George Washington Tucker, has finally returned home from the battlefields of France. Yet she is the only one in the family who senses that he has somehow changed.

Gee Dub moves back into his old bunkhouse quarters, but he’s restless and spends his days roaming. One rainy day while out riding he spies a woman trudging along the country road. She’s thoroughly skittish and rejects his help. So Gee Dub cannily rides for home to enlist his mother in offering the exhausted traveler shelter.

Once made comfortable at the Tucker farm, Holly Johnson reveals she’s forged her way from Maine to Oklahoma in hopes of finding the soldier she married before he shipped to France. At the war’s end, Daniel Johnson disappeared without a trace. It’s been months. Is he alive? Is she a widow?

Holly is following her only lead – that Dan has connected with his parents who live yonder in Okmulgee. Gee Dub, desperate for some kind of mission, resolves to shepherd Holly through her quest although the prickly young woman spurns any aid. Meanwhile, Alafair has discovered that Gee Dub sleeps with two cartridge boxes under his pillow – boxes containing twenty “dead men” each. The boxes are empty, save for one bullet. She recognizes in Gee Dub and Holly that not all war wounds are physical.

Then Holly’s missing husband turns up, shot dead. Gee Dub is arrested on suspicion of murder, and the entire extended Tucker family rallies to his defense. He says he had no reason to do it, but the solitary bullet under Gee Dub’s pillow is gone. Regardless, be he guilty or innocent, his mother will travel any distance and go to any lengths to keep him out of prison.

“Question: FORTY DEAD MEN is your 10th Alafair Tucker novel. When you wrote the first book in the series, THE OLD BUZZARD HAD IT COMING, did you ever foresee that you would reach 10 books, and counting?”

“Donis Casey: When I created Alafair and her family, it seemed natural that each book in the series be based around one of Alafair’s nine (and later, 10) children, so I started out with the idea of writing 10 novels. I’m lucky that I’ve had the opportunity to carry on with the series as long as I have. I love historical novels and novels set in exotic locations, because when I read, I like to go to a place and live there for a while. I wanted to write a series of historical mysteries that contained all the things I love to read myself. I wanted the books to have a great deal of humanity, a warm central character, a detailed evocation of the time and place. But in order to make the world as real as I could, I “wrote what I know” — my own family background. Many of the details of farm life, such as using kerosene-soaked corn cobs to start a fire, I learned from my mother, who grew up on a subsistence farm in Oklahoma during the Depression. The characters began as composites of family members, but they have become their own people.

“FORTY DEAD MEN is the 10th book in the series, and now we’ve reached the end of the 1910s. But I can see that there is more of the Tuckers’ story to be told. All kinds of wild things happened in the 1920s that I could use as a basis for a rollicking mystery, so there will be more Alafair Tucker novels in the offing.”

If you want to read the rest of Barson’s interview with Donis Casey, you can find it here. https://bit.ly/2EHCtB2