Karen Cleveland’s Need to Know is the current Hot Book of the Week at the Poisoned Pen. You can order a signed copy through the Web Store. https://bit.ly/2EAQygx 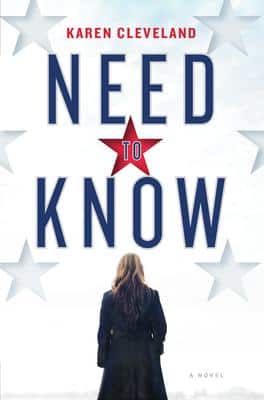 Here’s the summary of this week’s Hot Book.

In pursuit of a Russian sleeper cell on American soil, CIA analyst Vivian Miller uncovers a dangerous secret that will threaten her job, her family—and her life. On track for a much-needed promotion, she’s developed a system for identifying Russian agents, seemingly normal people living in plain sight.

After accessing the computer of a potential Russian operative, Vivian stumbles on a secret dossier of deep-cover agents within America’s borders. A few clicks later, everything that matters to her—her job, her husband, even her four children—is threatened.”Ž

Vivian has vowed to defend her country against all enemies, foreign and domestic. But now she’s facing impossible choices. Torn between loyalty and betrayal, allegiance and treason, love and suspicion, who can she trust?

“Shaping up to be one of the year’s biggest new thrillers.”—Entertainment Weekly

“So timely . . . Think of the perfect mix of Homeland and The Americans. . . . Need to Know needs to be read by all who relish spy novels. As entertaining as it is informative and as irresistible as it is impossible to put down.”—Providence Journal

“An early contender for next year’s Gone Girl.”—GQ (UK)

“The Russia page-turner that should be on everyone’s list.”—New York Post