If you are in the Phoenix area on Thursday, January 4, you might want to be at the Poisoned Pen at 7 PM.  Jeffrey Siger will be there to discuss and sign his latest Chief Inspector Andreas Kaldis mystery, An Aegean April. On January 2nd Poisoned Pen Press launches Chief Inspector Andreas Kaldis’ ninth mystery-thriller, An Aegean April, (“ripped from the headlines…a winner”—Publishers Weekly, “Brimming with suspense and a distinct sense of place”—Kirkus Reviews). 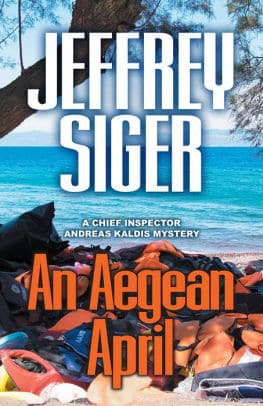 Here’s what Jeffrey Siger had to say in his recent newsletter.

I’m particularly proud of this newest Kaldis mystery-thriller, for it takes a highly complex set of circumstances, makes it comprehensible, and shows us why it matters, by bringing to life the many human elements comprising an ongoing tragedy far too often summarily put out of mind by the phrase, “Refugee Crisis.” An Aegean April puts a face to the moneymakers, traffickers, fearful families, NGO activists, local islanders, politicians, press, and cops caught up in a crime story that is a natural byproduct of what has emerged as a seminal test of our claim to humanity.

It all begins one evening on the eastern Aegean Greek island of Lesvos, close by Turkey, when the patriarch of a prominent shipping family, with a plan for shutting down the lucrative refugee trafficking pipeline between Turkey and Lesvos, is struck down in his own garden by a swishing sword.

When a refugee-turned-NGO-aid-worker is found at the scene, splattered with the victim’s blood, he’s immediately arrested by the local police, but his NGO boss convinces Chief Inspector Andreas Kaldis to take over the investigation, and we’re off on a nail-biting ride through Byzantine island politics, deteriorating diplomatic relations, and a world on fire amid the intrigues and brutality of a cool, resourceful, ruthlessly villainous narcissist, who keeps you in fearful suspense until the very end.

As described by the Greek press, “An Aegean April zeroes in on today’s Greece, at the heart of the refugee crisis, and takes no prisoners. Jeff is so adept at capturing the plight of Greece and its crises, while at the same time, showing his love for his adopted country. This book will make you rethink what you know about the refugee crisis and its accompanying players. Jeff knocks it out of the park once again.”—Windy City Greek.

Hopefully, you can be there on January 4 when Jeffrey Siger is Joined by Thomas Perry who will be signing The Bomb Maker. If you can’t make it, you can order signed copies through the Web Store. https://store.poisonedpen.com