I’ve been saving this article for months, waiting until Val McDermid’s new Tony Hill/Carol Jordan crime novel was about to be released in the U.S. Insidious Intent is due out Dec. 5, but you can pre-order your copy through the Web Store. https://bit.ly/2Amuc0h 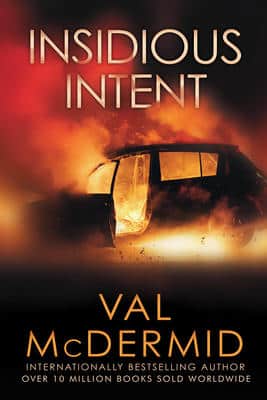 I just couldn’t resist the title of Katy Guest’s article in The Guardian, “Val McDermid: Even on a romantic holiday my thoughts turn to murder.” https://bit.ly/2ikDapU

If your thoughts turn to murder when you hear the name Val McDermid, you might want to  read the summary of Insidious Intent.

“Powerful . . . McDermid’s prose is pure pleasure to read . . . The plot is tight, the story is thrilling, the ending is as satisfying as they come . . . A master operating at the height of her considerable powers. Prepare to be swept away.”—Mystery SceneonSplinter the Silence

Widely recognized as one of our finest crime writers, with numerous accolades and legions of devoted readers worldwide, internationally bestselling author Val McDermid is back with the latest installment in her series featuring psychologist Tony Hill and former police detective Carol Jordan. InInsidious Intent, Tony and Carol are on the hunt for a serial killer who victimizes women at weddings without a date—and forces the duo to confront their most haunting moral dilemma so far.

In the north of England, single women are beginning to disappear from weddings. A pattern soon becomes clear: Someone is crashing the festivities and luring the women away—only to leave the victims’ bodies in their own burned-out cars in remote locations. Tony and Carol are called upon to investigate—but this may be the toughest case they’ve ever had to face. Meanwhile, Detective Sergeant Paula McIntyre and her partner Elinor must deal with a cruel cyber-blackmailer targeting their teenage ward, Torin.