Joan Hess died this past week. This may not have been the most recent photo of her, but it’s my favorite. 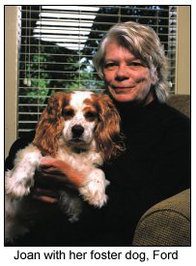 Hess is best known for her Arly Hanks mysteries, known as the Maggody mysteries, and the Claire Malloy mysteries, both series set in Arkansas. She also wrote the Theo Bloomer mysteries, under the pseudonym Joan Hadley. She wrote numerous short stories, and won the Agatha Award for “Too Much To Bare”. Then, this year, she finished a manuscript left by her good friend, Barbara Mertz. Mertz, who wrote as Elizabeth Peters, discussed and shared her notes with Hess so the final Amelia Peabody book, The Painted Queen, could be finished.

Hess was a member of Sisters in Crime and a former president of the  American Crime Writers League. Many of her novels, including The Painted Queen, can be ordered through the Web Store.  https://bit.ly/2hTEufD