Tess Gerritsen will be at The Poisoned Pen on Monday, Sept. 4 at 4 PM to discuss her new book, I Know a Secret. That title is this week’s Hot Book of the Week. 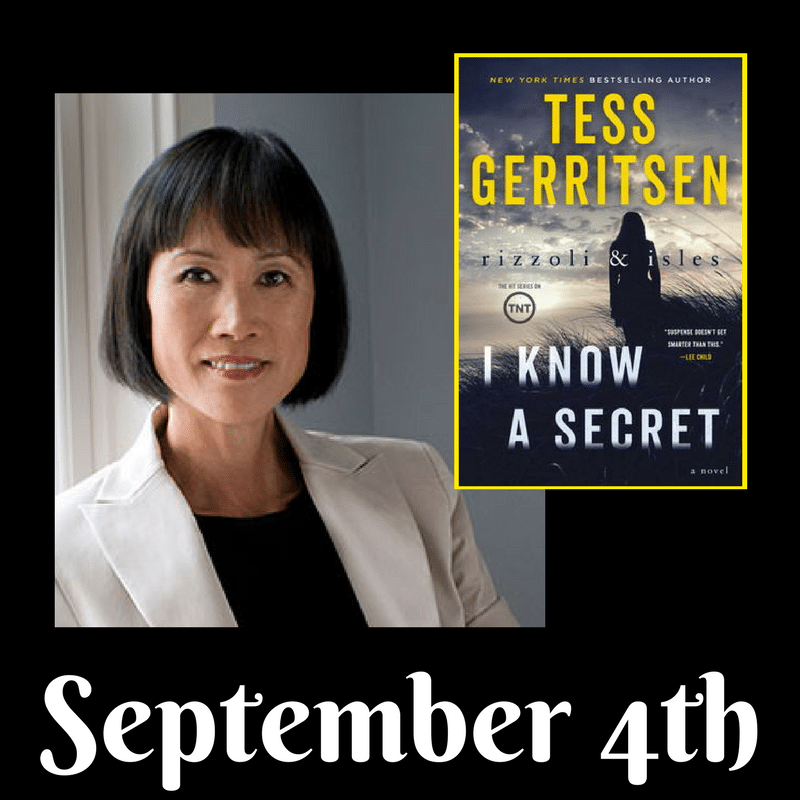 Even if you can’t be there, you can order a signed copy of the book through the Web Store. https://bit.ly/2vTJRjE

Two separate homicides, at different locations, with unrelated victims, have more in common than just being investigated by Boston PD detective Jane Rizzoli and medical examiner Maura Isles. In both cases, the bodies bear startling wounds—yet the actual cause of death is unknown. It’s a doubly challenging case for the cop and the coroner to be taking on, at a fraught time for both of them. As Jane struggles to save her mother from the crumbling marriage that threatens to bury her, Maura grapples with the imminent death of her own mother—infamous serial killer Amalthea Lank.

While Jane tends to her mother, there’s nothing Maura can do for Amalthea, except endure one final battle of wills with the woman whose shadow has haunted her all her life. Though succumbing to cancer, Amalthea hasn’t lost her taste for manipulating her estranged daughter—this time by dangling a cryptic clue about the two bizarre murders Maura and Jane are desperately trying to solve.

But whatever the dying convict knows is only a piece of the puzzle. Soon the investigation leads to a secretive young woman who survived a shocking abuse scandal, an independent horror film that may be rooted in reality, and a slew of martyred saints who died cruel and unusual deaths. And just when Rizzoli and Isles think they’ve cornered a devilish predator, the long-buried past rears its head—and threatens to engulf more innocent lives, including their own.

Praise for I Know a Secret: A Rizzoli & Isles Novel

“Tess Gerritsen brings back Boston homicide detective Jane Rizzoli and medical examiner Maura Isles to tackle another baffling mystery . . . weaving a thriller that slowly unfolds in unexpected ways. . . . Rizzoli and Isles feel like real people, and readers who are fans of either the book series or the former TV show know there’s an emotional angle to the proceedings and care about everything that happens to the duo. . . . Gerritsen writes effortlessly, and this is another stellar entry in the series.”—The Washington Post

“The unforgettable team of Rizzoli and Isles is back working on a chilling and difficult case. . . . The twists and turns this novel takes will force Gerritsen’s heroines to face difficult emotions and their own biases. As always, Gerritsen is a master storyteller!”—RT Book Reviews

“The characters converge in dynamic, diabolical ways and, in doing so, reveal past events that continue to haunt the present day. . . . Gerritsen continues to surprise with the depth and range of her storytelling ambitions. . . . Like the best of big-screen boogeyman blockbusters, there’s complex villainy, a distortion between appearance and reality, and a third-act plot twist that will both surprise and satisfy. This one’s a tasty treat with substance.”—CriminalElement.com

“Be prepared for an exciting ride with unexpected twists and terrific writing.”—Library Journal