Martin Edwards’ latest nonfiction title, The Story of Classic Crime in 100 Books, is this week’s Hot Book of the Week at The Poisoned Pen. You can find it in the Web Store. https://bit.ly/2wi5UVX 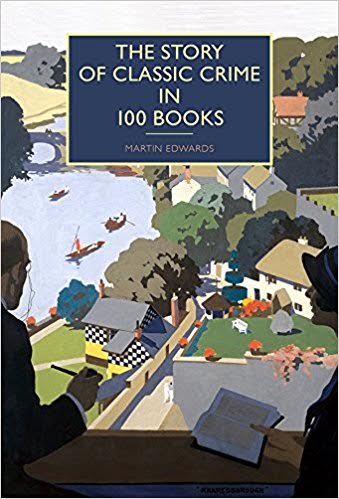 Michael Dirda’s recent review in The Washington Post includes reasons you should want to read this book. https://wapo.st/2wplvSI It’s called “How many of the top 100 crimes novels of the early 20th century have you read?” He says, “To my mind, Edwards particularly shines in the prefatory essays to his 24 categories, in which he mentions some of his own favorite books, such as Henry Wade’s “Lonely Magdalen” — about the murder of a nameless prostitute — and Robert Player’s twisty “The Ingenious Mr. Stone,” which “signaled the end of the era” or, most intriguing of all, Cameron McCabe’s “The Face on the Cutting-Room Floor,” described by Julian Symons as “the detective story to end detective stories.”

Still undecided? Here’s the summary of the book from the Web Store.

This book tells the story of crime fiction published during the first half of the twentieth century. The diversity of this much-loved genre is breathtaking, and so much greater than many critics have suggested. To illustrate this, the leading expert on classic crime discusses one hundred books ranging from The Hound of the Baskervilles to Strangers on a Trainwhich highlight the entertaining plots, the literary achievements, and the social significance of vintage crime fiction. This book serves as a companion to the acclaimed British Library Crime Classics series but it tells a very diverse story. It presents the development of crime fiction-from Sherlock Holmes to the end of the golden age-in an accessible, informative and engaging style.

Readers who enjoy classic crime will make fascinating discoveries and learn about forgotten gems as well as bestselling authors. Even the most widely read connoisseurs will find books (and trivia) with which they are unfamiliar-as well as unexpected choices to debate. Classic crime is a richly varied and deeply pleasurable genre that is enjoying a world-wide renaissance as dozens of neglected novels and stories are resurrected for modern readers to enjoy. The overriding aim of this book is to provide a launch point that enables readers to embark on their own voyages of discovery.