Susan Elia MacNeal’s latest Maggie Hope mystery, The Paris Spy, is the selection for the History/Mystery Book Club. You can order a signed copy through the Web Store. https://bit.ly/2vx93Oh 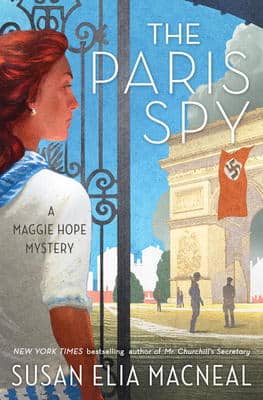 Maggie Hope has come a long way since serving as a typist for Winston Churchill. Now she’s working undercover for the Special Operations Executive in the elegant but eerily silent city of Paris, where SS officers prowl the streets in their Mercedes and the Ritz is draped with swastika banners. Walking among the enemy is tense and terrifying, and even though she’s disguised in chic Chanel, Maggie can’t help longing for home.

But her missions come first. Maggie’s half sister, Elise, has disappeared after being saved from a concentration camp, and Maggie is desperate to find her—that is, if Elise even wants to be found. Equally urgent, Churchill is planning the Allied invasion of France, and SOE agent Erica Calvert has been captured, the whereabouts of her vital research regarding Normandy unknown. Maggie must risk her life to penetrate powerful circles and employ all her talents for deception and spycraft to root out a traitor, find her sister, and locate the reports crucial to planning D-Day in a deadly game of wits with the Nazi intelligence elite.

Advance praise for The Paris Spy

“You will grieve with Paris. You will be outraged by the destruction. You will be terrified for all the heroes, be there with them every step, and care desperately that they succeed and survive. And perhaps above all, like me, you will be overwhelmed with their sacrifice for the freedom we still enjoy.”—Anne Perry, New York Times bestselling author of the Charlotte and Thomas Pitt series and the William Monk series

“This has to be Maggie Hope’s most exciting adventure yet. Vivid and fast-paced, crammed with authentic detail, The Paris Spy is an extraordinary trip through the edgy drama of wartime Paris, skillfully plotted and studded with cameos by real historical figures.”—Jane Thynne, author of the Clara Vine series

“The Paris Spy is a mystery you won’t put down until the absolutely stunning conclusion. Only Susan Elia MacNeal—and the extraordinary Maggie Hope—could wrap such a tale of courage and betrayal around a secret that will cost lives and honor to protect.”—Charles Todd, New York Times bestselling author of the Inspector Ian Rutledge series and the Bess Crawford series.

You can watch and listen to Susan Elia MacNeal discussing the book with John Charles from The Poisoned Pen. https://livestream.com/poisonedpen/events/7624943

If you’re interested, here’s where you can read about and sign up for one of our Book Clubs. https://poisonedpen.com/book-clubs/