Keith McCafferty will be at The Poisoned Pen on Tuesday, July 11 at 7 PM to discuss his latest Sean Stranahan mystery, Cold Hearted River, and the Ernest Hemingway connection. 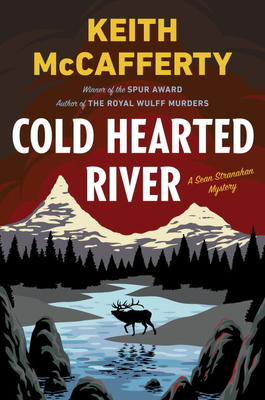 You can order a signed copy through the Web Store. https://bit.ly/2uPGQkg

Before I give you the Web Store’s summary of Cold Hearted River, let me add the note that McCafferty sent Barbara Peters, owner of The Poisoned Pen.

“I did get to go to Cuba for Field & Stream, and thanks to my friendship with Valerie Hemingway, I was able to walk freely inside the Finca Vigia, where he lived with Valerie and also his fourth wife, Mary.  A beautiful home.  Many of the artifacts in the novel, in the cabin where Per Jackson lives, are described exactly as they are in the Finca. It was a scary novel to write.  I had the premise dropped into my lap nearly 40 years ago, I had the long first chapter which also was inspired by a true event, but when you write a character who resembles Hemingway you do run the risk of making a fool out of yourself.” McCafferty will be bringing Barbara Peters a gift of a hand-tied fly, the McGinty fly pattern that was Hemingway’s favorite, and is described in the novel.

In the sixth novel in the acclaimed Sean Stranahan mystery series, Montana’s favorite detective finds himself on the trail of Ernest Hemingway’s missing steamer trunk. Buffalo Jump Blues, fifth in the series, is now available.

When a woman goes missing in a spring snowstorm and is found dead in a bear’s den, Sheriff Martha Ettinger reunites with her once-again lover Sean Stranahan to investigate. In a pannier of the dead woman’s horse, they find a wallet of old trout flies, the leather engraved with the initials EH. Only a few days before, Patrick Willoughby, the president of the Madison River Liars and Fly Tiers Club, had been approached by a man selling fishing gear that he claimed once belonged to Ernest Hemingway. A coincidence? Sean doesn’t think so, and he soon finds himself on the trail of a stolen trunk rumored to contain not only the famous writer’s valuable fly fishing gear but priceless pages of unpublished work.

The investigation will take Sean through extraordinary chapters in Hemingway’s life. Inspired by a true story, Cold Hearted River is a thrilling adventure, moving from Montana to Michigan, where a woman grapples with the secrets in her heart, to a cabin in Wyoming under the Froze To Death Plateau, and finally to the ruins in Havana, where an old man struggles to complete his life’s mission one true sentence at a time.