Actually, Diana Gabaldon and Laurie R. King were not matched up in the recent collection edited by Lee Child. 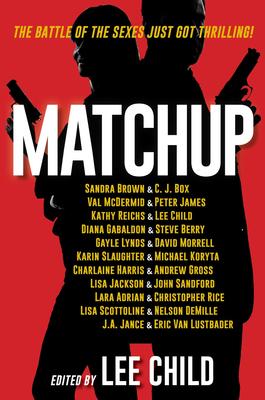 They were matched up for a conversation sponsored by The Poisoned Pen. Diana Gabaldon is one of the featured authors in the book. Jamie Frasier and Steve Berry’s Cotton Malone were matched up in a story called “Past Prologue”. Here’s a summary of the book.

In this incredible follow-up to the New York Times and USA TODAY bestseller FaceOff, twenty-two of the world’s most popular thriller writers come together for an unforgettable anthology.

-Lee Coburn and Joe Pickett in “Honor & …” by Sandra Brown and C.J. Box
-Tony Hill and Roy Grace in “Footloose” by Val McDermid and Peter James
-Temperance Brennan and Jack Reacher in “Faking a Murderer” by Kathy Reichs and Lee Child
-Jamie Fraser and Cotton Malone in “Past Prologue” by Diana Gabaldon and Steve Berry
-Liz Sansborough and Rambo in “Rambo on Their Minds” by Gayle Lynds and David Morrell
-Jeffrey Tolliver and Joe Pritchard in “Short Story” by Karin Slaughter and Michael Koryta
-Harper Connelly and Ty Hauck in “Dig Here” by Charlaine Harris and Andrew Gross
-Regan Pescoli and Lucas Davenport in “Deserves to be Dead” by Lisa Jackson and John Sandford
-Lucan Thorne and Lilliane in “Midnight Flame” by Lara Adrian and Christopher Rice
-Bennie Rosato and John Corey in “Getaway” by Lisa Scottoline and Nelson DeMille
-Ali Reynolds and Bravo Shaw in “Taking the Veil” by J.A. Jance and Eric Van Lustbader

That’s an enticing book, isn’t it? You can order a signed copy through the Web Store. https://bit.ly/2r8dCM9

Here are photos from the recent event.