I recently asked several authors to talk about the country they write about in their books.  When I think “April in Paris”, I immediately think of Cara Black and her AimÃ©e Leduc Investigations. Cara took the time to write a post.

Almost spring time in Paris and time for crime. Daffodils are popping up and that goes for crime fiction. Especially in April, which rides the coattails of the Paris March book fair celebrated as Salon du Livres, the annual uber Paris book publication party of hundreds of French books. Some ancient decree or Ministry directive decided that once a year the French publishers will birth their product to inundate the market for the rest of the year. So in April, you’ll find readers, the French love books, on the buses, the Metro in the parks buried in a book. I really noticed in Paris how so many people read on public transport and in the park.

Speaking of crime fiction, my detective AimÃ©e Leduc, these days with a baby, only has time to read Parent how-to books while her partner RenÃ© Friant, who is an ardent bibliophile loves Agatha Christie. I’ve had fun with this in the series and the interplay between them – he loves literary fiction and thrillers and she’s always teasing him about that. In Murder in Saint Germain, AimÃ©e’s next investigation, it’s a plot point because RenÃ© likens surveillance to a Georges Perec novel – nothing happens – and I can’t reveal how, but it stimulates a discovery. 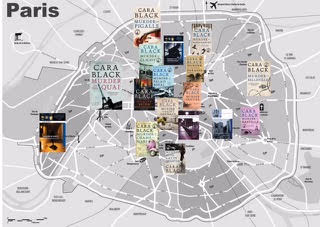 In the series, we’ve seen a few years pass and the seasons change. That’s one thing I love about writing books set in Paris – there are four seasons. I live in San Francisco where we have one season – fog. But life in the City of Light is very much dictated by the seasons; the seasonal produce in the markets, the holidays and of course, fashion.  Paris Fashion week, the bi-annual clothing sales – again dictated by the government – the way you know winter’s arrived when the fountains are drained so they don’t freeze, the Paris plage in summer when the city makes a sandy beach on the Seine’s river banks and you can buy glacÃ© ice cream.

April in Paris isn’t like the song, says AimÃ©e Leduc in Murder in Belleville, my second book in the Paris investigation series. Mais non, I can hear a bus driver on the #29 driving through the Marais his tires splashing over the puddles and gusts of wind, it’s liquid sunshine.

Cara Black will be back at The Poisoned Pen on June 7 for the release of the next AimÃ©e Leduc book, Murder in Saint-Germain. In the meantime, you can find her other books through the Web Store. https://bit.ly/2oqrMuj