The Poisoned Pen is Jacqueline Winspear’s first appearance for her new Maisie Dobbs book, In This Grave Hour. She’ll be here on Monday, March 13 at 7 PM. 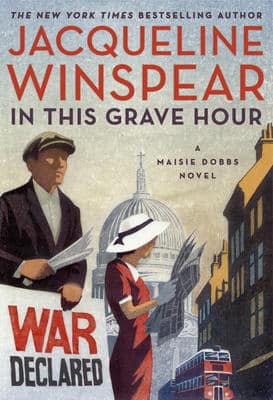 Her last two newsletters have been fascinating, providing background of the book. Check out the first of the two.

Well, it’s only about 6 weeks to go before publication of In This Grave Hour, my new novel featuring psychologist-investigator, Maisie Dobbs. I can’t believe it’s the 13th novel in the series! When I began to write Maisie Dobbs, the first book in the series, I thought I was embarking upon the only novel I would ever write, and I feared the manuscript, when finished, would languish in a drawer forever. It was as time went on and I wrote deeper into the story, that I realized there were more experiences in my head for Maisie Dobbs—and I began to hope that, maybe, if I were lucky, an agent might pick out my proposal from the pile that arrived every day. I still pinch myself at times, incredibly aware of my good fortune that Maisie Dobbs was “discovered.”

In This Grave Hour is dedicated to “our family’s WWII evacuees”—I was raised listening to so many of my late mother’s stories of being evacuated from London to the country on September 1, 1939. She was one of ten children—the eldest three joined the services, and the younger seven were all evacuated, sent away to live with complete strangers for the duration of the war. Well—almost. As soon as children reached the age of fourteen, they were invariably sent back home; after all, fourteen was the age at which most children left school and started work.

There is an assumption that so many evacuees came from poor city families and were grateful to be let loose in the countryside. To be fair, for many children there was great joy to be found living close to farms and away from smoky streets. But by the same token, there were those who came from homes with indoor bathrooms who were shocked to find themselves in cold houses with no privacy to take care of personal hygiene, and a WC reached only after a long, cold trek to the end of the garden. And so many of those children experienced abuse at the hands of the very people entrusted with their care, while others found only kindness. People often ask me about the background research that underpins my novels. For my work on In This Grave Hour, I had only to turn to family stories to write about the war on the home front, and to create the character of Anna, the young evacuee who is sent to live at Maisie Dobbs’ home in the country. She is fortunate to be billeted at a home where there are caring people—sadly this was not so for many children.

If you can get your hands on a copy, one of the best books on the subject was written some 30-odd years ago by the late Ben Wicks, a British-born Canadian cartoonist, illustrator, journalist, author—and former evacuee. As part of his research for No Time To Wave Goodbye, about the evacuation of children at the outset of WWII, Wicks placed an advertisement in several newspapers and—having expected only a few replies—was overwhelmed by the thousands of letters he received. Many began with the words, “I have never told anyone about this …” and went on to describe the personal trials, tribulations—and for some, the good times—that began when they were put on a train with an identification label tied to their coat, and waved goodbye to their mother. I bought my mother a copy of the book, but she could read only a few pages—it brought back so many troubling memories.

“Every war is a war against the child.” So said Eglantyne Jebb, founder of the Save The Children Fund. Anna, the evacuee who comes into Maisie’s life, is not the only child to face uncertain times in In This Grave Hour. There are others—a group of boys who suffered as refugees in the Great War. They are men now … and as a new war begins, someone is killing them, one by one.

In This Grave Hour will be published on March 13th. Here’s a list of cities I’ll be visiting on my 2017 book tour—fuller details on event locations, contact details and times will be up on the Appearances page of my website soon! Save the date if you’re in the area for one of these events!

Hope to see you along the way!
Jacqueline
“This is the thirteenth in the Dobbs series, and even as the time frame has moved through the first war and the years between the wars, Winspear has continued to explore the aftermath of the nightmare that was WWI—the effects the conflict had on people and society. She does so again here, just as the world takes its first steps into another devastating global conflict. It’s a fine novel, written with Winspear’s sure hand and ability to meld historical events into an engaging crime narrative. Fans will savor this one as they anticipate what Maisie will do in WWII.”
—Booklist

In This Grave Hour will be published on March 13th.

Signed copies of In This Grave Hour will be available through the Web Store. https://bit.ly/2mPCedT