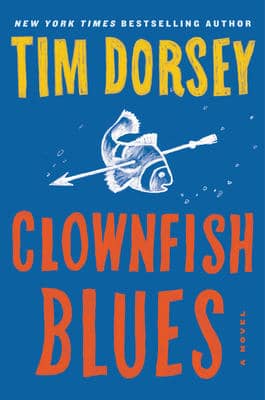 Here’s the description of the 21st Serge Storms book, as described in the Web Store.
A (Serge A.) Storm is brewing for a cabal of bad guys gaming the Florida state lottery in this insanely funny novel from the maestro of mayhem, Tim Dorsey.

If you’re loud and proud Floridian Serge A. Storms, how do you follow up your very own remake of Easy Rider? You shoot your own “episodes” of your favorite classic television show, Route 66!

With Coleman riding shotgun, Serge is rolling down the highway of his dreams in a vintage silver convertible Corvette just like the snazzy car Martin Milner drove. It doesn’t matter that the actual Route 66 didn’t pass through Florida, for Serge discovers that a dozen episodes near the series’ end were filmed (really!) in his beloved home state. So for Serge and the always toked and stoked Coleman, the Sunshine State is all the road you need to get your kicks.

But their adventure traveling the byways of the Sunshine State’s underbelly is about to take a detour. Someone is trying to tilt the odds in the state lottery amidst a conga line of huge jackpots spinning off more chaos than any hurricane season. With this much at stake, of course every shady character wants in. Crooked bodega owners, drug cartels laundering money through the lottery, and venture capitalists are all trying to game the system—and lining up to get their cut. They’re also gambling with their lives, because when Serge and Coleman get hip to this timely (and very lucrative) trip, there’s no telling whose number is up next.

Throw in Brooke Campanella, Serge’s old flame, as well as the perpetually star-crossed Reevis, and it’s a sure bet that the ever lucky Serge will hit it big. Winning has never been this deadly—or this much fun!

If you haven’t had the chance to hear Tim Dorsey talk about his books lately, you can watch his interview with Barbara Peters, owner of The Poisoned Pen. It’s on Livestream. https://livestream.com/poisonedpen/events/6962949

And, you can order signed copies of Clownfish Blues through the Web Store. https://bit.ly/2mTrR5I