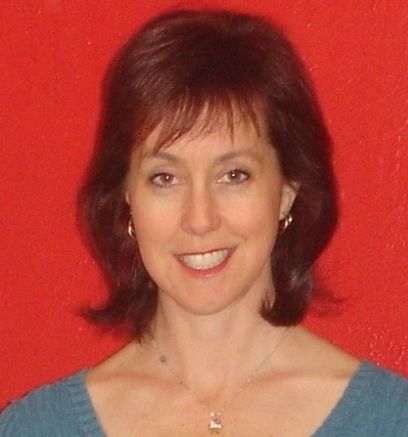 Jenn McKinlay’s latest book, Better Late Than Never, is out, so it was the perfect time to catch up with the busy author and ask her to talk with me. Jenn will be at The Poisoned Pen to discuss her mystery on Saturday, November 26 at 2 PM. And, if you come a little earlier for Small Business Saturday, you might ask her to recommend a book.

Jenn, would you introduce yourself to readers?

Hi! This is the part where I wish I had a Marvel Comicesque sort of origin story. You know, like I was hit by lightning and could run really fast or I was born on an island of all women and had an invisible jet. Yeah, that’d be cool. Sadly, I do not have anything like that. Pity. Probably, this is exactly why I became a writer because after spending my childhood with my nose firmly wedged in between the pages of a book, I realized life is better in there. I read everything I could get my hands on as a kid and when I got older and it became harder and harder to find compelling reads, it occurred to me that writing might be the natural progression of this disorder, so in my twenties after working as a librarian for several years, I started writing. It took a while (read forever) to get published but once I did I knew it was exactly how I was meant to spend my life and I have never looked back.

Would you introduce us to Lindsey Norris?

Lindsey Norris is the librarian amateur sleuth in my Library Lover’s Mysteries. She began her career as an archivist but because of downsizing, she finds herself in a new position as the director of a small town library in Connecticut. This series brought me back to my roots as I became a librarian in Connecticut and lived and worked in small towns that I use as reference points for Briar Creek, the town in which the series is set and where they seem to have an inordinate amount of murders. There were no murders when I was a librarian, I swear.

Tell us about Better Late Than Never without spoilers, please. 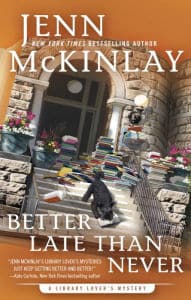 The library is having a fine amnesty where residents can return long overdue items without having to pay their fines. One of the books that is returned was due twenty years ago. Lindsey, being curious, looks up the old record and discovers that the book was checked out to local English teacher Candice Whitley on the day that she was murdered. Now Lindsey has to find out who returned the book and determine whether that person is Candice’s killer.

How many series do you juggle at one time? Would you tell us about the ones other than the Library Lover’s Mysteries?

I write several mystery series. There is a Cupcake Bakery mystery series set in my current hometown of Scottsdale, Arizona. The intrepid bakers Melanie Cooper and Angie DeLaura bake cupcakes while solving mysteries because cupcakes and death go together better than you’d think. I’m kidding. No, I’m not! I also have a series set in a London Hat Shop (yes, mostly because I wanted to go to London to do research) where American Scarlett Parker owns a hat shop with her cousin Vivian Tremont and the twosome solve mysteries while selling hats to London’s finest. Makes perfect sense, I know. I’m also branching out into romantic comedies with a series debut in May of 2017 called About a Dog. Mackenzie Harris, the heroine, is going home after seven years away and nothing is quite as she expected it to be, including the puppy she finds abandoned in an alleyway.

Now that you’re no longer working in the public library, what do you miss most about the library?

I miss the books! There was something incredibly comforting about all those shelves and shelves and shelves full of knowledge and entertainment. I miss my co-workers. Librarians and library workers actually do have some of the most fascinating origin stories. And I miss working with the public and really making a difference in someone’s life, whether it was helping them with a book report for school or a job application or finding out whether the set of china grandma left them was worth anything ““ it was never ever dull.

Jenn, what authors have inspired you?

So many! Probably the top three that got me into writing mysteries are Robert Crais, Harlan Coben, and Janet Evanovich. Very distinctive styles but all very talented.

My favorite writing quote comes from Neil Gaiman. “Trust your obsession.” Did you ever have an obsession that you had to turn into a story? What was it?

The whole hat thing. Watching Will and Kate’s wedding, I was fascinated by the flattened squid on Princess Beatrice’s head and it really got me obsessed with the British obsession with hats. They are magnificent works of art and I really wish they’d catch on in the States. Sigh.

Other than your own, name several books that you would never part with.

My collections by Lucy Maud Montgomery and Louise May Alcott. I read everything they wrote when I was a teenager and they are still my touchstones for writing. I’m not nearly as prose driven but I do love they way they both turn a phrase. I’m a big series reader so I have everything from John D. MacDonald’s Travis McGee to Suzanne Collins’s Gregor the Overlander. I love series. I love watching characters develop over several books. I would have a very hard time parting with any books in a beloved series.

What author would you like to push that you think is underappreciated?

That’s a tough one. I definitely feel as if women novelists do not get credit as readily as their male counterparts so I’d have to stick with the girls and say Denise Mina and Sara Gran. I think they both tell fascinating tales and I don’t think they get as much recognition as they deserve.

Oh, boy. It’s not so much a pile as it is a tower. The one downside to writing is that it severely cuts into your reading time! A glance at the top of the pile and the three I see are:

Thank you, Jenn! As I said, Jenn McKinlay will be at The Poisoned Pen on Saturday, Nov. 26 at 2 PM. (She’s bringing cupcakes!) 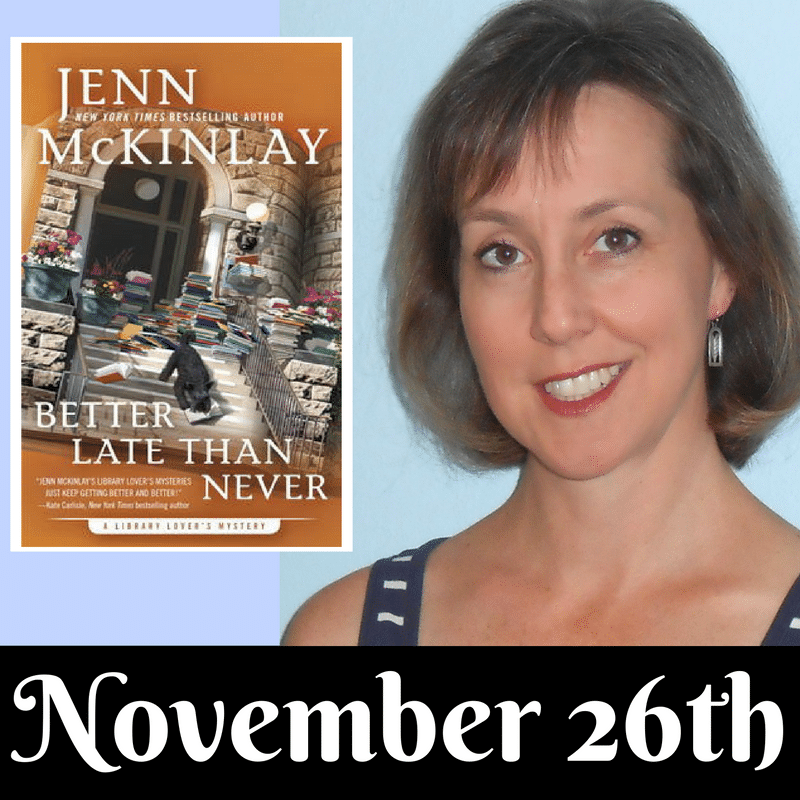 You can purchase a signed copy of Better Late Than Never through the Web Store. https://bit.ly/2g5EKal