Donis Casey will be appearing with Carolyn Hart and Hannah Dennison at The Poisoned Pen Tuesday, October 4 at 7 PM. I asked the author of All Men Fear Me and the other Alafair Tucker mysteries to sit in the hot seat for an interview. Thank you, Donis. 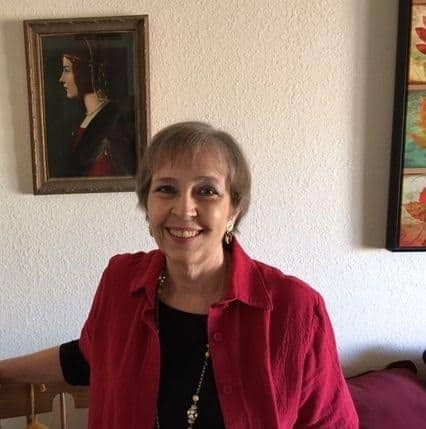 Donis, would you introduce yourself to readers?

I was born and raised in Tulsa, Oklahoma. I graduated from the University of Tulsa with a degree in English, and earned a Master’s degree in Library Science from Oklahoma University. After teaching school for a short time, I enjoyed a career as an academic librarian, working for many years at the University of Oklahoma and at Arizona State University in Tempe, Arizona. I left academia in 1988 to start my own business and after more than a decade as an entrepreneur, I decided to devote myself full-time to writing. I am the author of the Alafair Tucker Mysteries, set in Oklahoma during the booming 1910s and featuring the sleuthing mother of ten children. I have twice won the Arizona Book Award, been a finalist for the Willa Award and am a seven-time finalist for the Oklahoma Book Award. My first novel, The Old Buzzard Had It Coming, was named an Oklahoma Centennial Book.The ninth Alafair Tucker Mystery, The Return of the Raven Mocker, will be available in January 2017 from Poisoned Pen Press. For the past thirty years I have lived in Tempe, AZ, with my husband.

Alafair Tucker is one of my favorite mystery characters. Tell us about Alafair.

Alafair Tucker is a woman in her early forties who lives with her husband Shaw and their ten children on a prosperous farm in Muskogee County, Oklahoma, during the booming 1910s.  She never sets out to solve murders, but all those pesky kids keep getting involved in unsavory situations, and need their mother to help get them out of trouble.  Fortunately, Alafair is the kind of woman who will do anything, legal or not so legal, for her kids.

I started writing about Alafair a dozen years ago almost as an act of defiance—well, maybe as atonement, too. I spent much of my youth trying not to be a “traditional housewife”, and it seems to me that many women, especially young women, have the mind-set that in order to be a person worthy of respect you have to compete in the business world. (cough-Lean In-cough). It’s almost like we believe in that Groucho Marx adage, “I wouldn’t want to belong to a club that would have me as a member.” When you really see what kind of life our foremothers lived, how smart and innovative and accomplished they had to be, you can’t help but be awed.

So I write about it, even knowing how people still think of traditional women. Women included.

Would you tell us about All Men Fear Me, without spoilers? 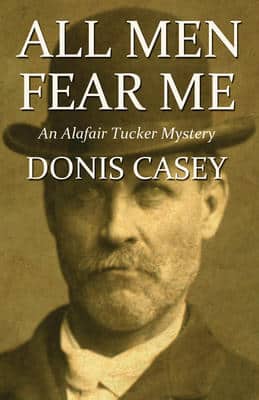 My first Alafair book The Old Buzzard Had It Coming, took place in 1912. In the eighth story, All Men Fear Me, occurs in 1917 at entry of the United States into World War I. Not all Americans are happy to go to war. After the country schedules the first draft lottery in April of ’17,  a violent clash occurs between rabid pro-war, anti-immigrant “patriots” and anti-conscription socialists who are threatening an uprising rather than submit to the draft.

Alafair is caught in the middle when her brother, a union organizer for the Industrial Workers of the World, pays her a visit. Rob Gunn is fresh out of an internment camp for participants in an Arizona miners’ strike. He assures Alafair that he’s only come to visit family, but she’s not so sure. On top of everything, Alafair’s eldest son enlists, and a group calling themselves the “Knights of Liberty” vandalizes the farm of Alafair’s German-born son-in-law.

Alfafair’s younger son, 16-year-old Charlie, is wildly patriotic and horrified by his socialist uncle. With his father’s permission Charlie takes a part-time war job at the Francis Vitric Brick Company. Soon several suspicious machine breakdowns delay production, and a couple of shift supervisors are murdered. Everyone in town suspects sabotage, some blaming German spies, some blaming the unionists and socialists. But Charlie Tucker is sure he knows who the culprit is and comes up with a plan to catch him red-handed.

And then there is old Nick, the mysterious guy in a bowler hat who’s been hanging around town.

Most of the books in this series are set in Oklahoma. Tell us about your Oklahoma connection.

I am a fourth generation Oklahoman, born and raised there. Since Oklahoma is certainly considered a “fly-over” state by those East- and West-Coasters, I was never too keen to admit my origins when I was traveling (though when I talk, English-speakers certainly can tell something is up with my accent.) But when I moved away from Oklahoma permanently, I was amazed at how little most people know about the fascinating history of the state. Years before it was admitted to the Union in 1907, Oklahoma was actually a foreign country, the Indian Territory. It slowly came to be taken over by white Americans, mostly cattlemen, then opened up practically overnight with a series of land runs in the western half of the state. It’s an amazing ethnic mix, wildly rich, full of outlaws, rife with stories to be told.

I’ve always had eclectic taste. I especially love historical and sci-fi—and mysteries of course. But my writing was really affected by Ellis Peters, Ursula LeGuin, Mary Renault, Josephine Tey. As for people who are currently writing, I find myself studying Timothy Hallinan, Margaret Atwood, Louise Penny. I’m leaving out plenty of other authors I admire and stealthily steal from.

Donis, I know how much I miss Arizona. Where do you take visitors?

I like to show visitors my home town of Tempe, with its beautiful treelined downtown, the ASU campus, the lake park. I like to take people to Old Town Scottsdale, too. We always drop in at Poisoned Pen, of course. I live close to the town of Guadalupe, which was featured in one of my books (The Wrong Hill to Die On) and has a beautiful and historic Pascua Yaqui church. If my visitors are here for a while, a trip to Sedona can’t be beat. We took my brother and his wife up there last year and they’re still talking about it. Oh, then there is Tucson and the Sonoran Desert Museum. It’s hard to believe how beautiful a lot of Arizona scenery is until you’ve seen it with your own eyes. (p.s. we miss you, too.)

Other than author, what is the most interesting job you ever had?

I very much enjoyed being a Government Documents librarian at University of Oklahoma and at Arizona State. Not the part where I was an academic middle manager. I loved the documents that the Government Printing Office sent to the universities over the decades. All the Congressional hearings, like HUAC and Watergate, the Pentagon Papers, documents from the “War of the Rebellion“, now known as the Civil War, travel and living guides for diplomats posted to every country in the world, biographies of all the First Ladies, World War II propaganda posters, how to raise rabbits, regulations and instructions on how to build a shed…you name it, the government is in on it!

Running a Celtic import shop for ten years was kind of cool, too.

Here‘s my favorite recent quote. Neil Gaiman said, “Trust your obsession.“ Did you ever have an obsession that you had to turn into a story? What was it?

Yes, actually, I have written such a thing though I haven’t tried to have it published yet. I wrote a novel one might call “magical realism”, because I’m obsessed with the nature of reality and I believe that what we think of as “magic” is really “realism”.

I deal a little bit in magical realism in the Alafair books.

I just finished Ann Hood‘s novel, The Book That Matters Most. A character admits that the book can change throughout our lives. Is there a book that mattered most to you? Why?

So many books. When I was little, I got into Lucy Fitch Perkins’ Twins series, which made me a voracious reader and also made me wildly curious about other cultures—a curiosity which has lasted to this day. Speaking of children’s books, I must have read The Angry Planet a dozen times when I was a young teen. That book gave me a lifelong love of science fiction. Beau Geste made me a romantic. But the book that really changed my conception of the world was Autobiography of a Yogi, by Yogananda. I saw it on the bookshelf of the guy I was dating and he lent it to me. I was amazed. Whether I believed it all or not, the book made me realize that there are so many entirely different ways to look at reality than I had ever imagined. (p.s. I married the guy.)

The last book that knocked my socks off and made me proud to be a writer was The War of Art by Steven Pressfield.

At the moment—The Graveyard of the Hesperides by Lindsey Davis, Jeffrey Siger’s Santorini Caesars, Long Upon the Land by Margaret Maron, The Orphan Train by Christina Baker Kline. Boys in the Boat by Daniel James Brown. I’m currently re-reading Walter Mosely’s This Year You Write Your Novel.

Thank you, Donis. It’s always fun to get to know authors a little more. You can find out more about Donis on her website, www.doniscasey.com.  And, you can order Donis’ books through the Web Store. https://bit.ly/2cWSRiI