Michael A. Kahn’s latest Rachel Gold novel, The Dead Hand, is now available through the Web Store. You can order a signed copy. https://bit.ly/2crVqYL It has a fascinating premise. 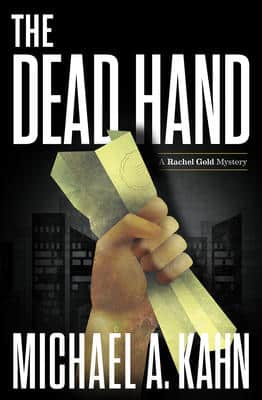 Here’s the description as it appears on our website. “Dead hand” is the English translation of the Latin term “mortmain,” which the law dictionary defines as “the influence of the past regarded as controlling the present.” For Rachel Gold, a more accurate term would be “zombies.” In particular, the wealthy zombies who seek to control the living—and especially their families—from the grave through legal documents prepared before they died.

In The Dead Hand, Rachel represents two women—one a widow, one a divorcee—in a pair of nasty zombie lawsuits, the outcome of each of which hinges upon a clause in a dead man’s document.

Rachel’s client Cyndi Mulligan is the young trophy widow of the late Bert Mulligan, a billionaire entrepreneur whose last will and testament left his estate to Cyndi’s daughter. The challenge comes from Bert’s angry first wife and her angrier only son. Their claim: Cyndi’s daughter—born eleven months after Bert’s death—cannot possibly be Bert’s child.

Rachel’s other client is Marsha Knight, the ex-wife of the wealthy founder of a women’s lingerie manufacturer. She’s been sued by his widow, who seeks to invalidate Marsha’s divorce settlement and, in the process, impoverish her through invocation of the ancient and nearly inscrutable Rule against Perpetuities.

As the trial date approaches in each lawsuit, the threats to Rachel and her two clients begin to escalate. Zombies, as Rachel discovers, are hard to kill, and so are their lawsuits.

Better yet, Kahn wrote a piece about “zombies” for Crimespree magazine. It’s shared here, with permission.

The Law of Zombies

By Michael A. Kahn

Zombies had grabbed the attention of lawyers and judges centuries before The Walking Dead premiered on AMC. I refer to a special species of zombies—the ones introduced in Chapter 7 of my newest Rachel Gold mystery, The Dead Hand:

Their lawyers call them “high net-worth individuals prepared to shoulder the responsibility for providing wealth for future generations and essential funding for important causes even after they are no longer with us.”

And since zombies are already dead, they’re hard to kill.

As a lawyer by day, I try to feature one curious legal concept in each of my novels. Past examples include the Dead Man’s Statute (a quirky rule of evidence) and the Qui Tam Action (a nasty species of lawsuit with roots in medieval England.

In a delusional moment as I pondered the plot of what became The Dead Hand, I decided to hinge the tale on an arcane law known as the Rule against Perpetuities. As with other zombie laws, the Rule seeks to limit the ability of dead people to control property and people (especially heirs) from the grave via various legal documents created while they were alive.

The key adjective there is “arcane.” As Rachel Gold explains:

The Rule against Perpetuities.

You first hear of it in your Property class as a One L. You try to master it in your bar review course after graduation. You forget it after you sit for the bar exam. And if you’re like most lawyers, you never think of it again. Ever.

I was one of those lawyers. For three decades of my career, the Rule against Perpetuities was just a distant, blurry, unpleasant memory. Thus when I decided to feature it in The Dead Hand, my first challenge was to figure it out.

Easier said than done. Although the Rule is just one sentence long, lurking beneath those thirty words are so many lethal trapdoors that some courts have held that an attorney who drafts a conveyance that violates the Rule against Perpetuities cannot be found guilty of malpractice.

So I arranged lunch with a friend of mine who is a trust-and-estates lawyer. After we gave the waiter our orders, I told him why I’d asked him to lunch.

He stared, eyes wide. “Are you serious?”

I assured him I was.

He leaned back in his chair, stared down at the table, and shook his head. But then he looked up with a smile. “Well, you won’t be the first.”

He chuckled. “I admit that only a trust-and-estates nerd would catch that plot twist. While the rest of you were salivating over Kathleen Turner’s body, we were geeking out over the will she’d forged, which was declared void for violating the Rule against Perpetuities, meaning she would inherit everything.”

Over the next hour, he tried to explain the Rule to me.

“The key phrase in Rule,” he said, “is “˜a life in being.’ Whatever grant you make in the will or document, the Rule says that it has to vest within 21 years of the death of some specified person who was alive at the time of the creation of the document. If not, the grant is void.”

Sounds simple, albeit a little odd. But the problem is that the Rule deals with unknown future events. It asks whether there is a possibility, no matter how remote, that the interest will fail to vest before that 21-year period expires. If so, the grant fails entirely.

As a result, any attempt to apply the Rule leads you down a rabbit hole of what-ifs and hypotheticals. Infamous examples from Property Law textbooks include the Case of the Unborn Widow, the Case of the Precocious Toddler, and the Case of the Bottomless Gravel Pit. Each violates the Rule in a manner you could never imagine—and that I still didn’t grasp as lunch ended.

Nevertheless, I was convinced that I’d found my quirky plot driver. As I drove back to the office, memories from my first-year Property class began returning. What was that hypothetical our professor used? Not the Case of the Unborn Widow. Hmmm . .  oh, yeah! The Case of the Fertile Octogenarian.

And that very night I opened a new document on my computer, leaned forward with a smile, and typed at the top of the first page “Chapter One.”