Margaret Coel recently announced Winter’s Child would be her last Wind River mystery. Here’s the announcement from her newsletter. 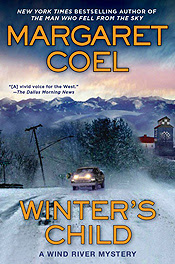 The FINAL novel in my Wind River series, Winter’s Child, arrives on September 6! Yes, you read that right. After twenty novels, I decided it was time to bring the mysterious adventures on the Wind River Reservation with Vicky Holden and Father John O’Malley to a close. Or, rather, allow them to close out their own stories. Will I miss these two people (I think of them as real people, not characters)? Oh, definitely. Will I miss all the other people, like the Bishop and Elena, the elders, even some of the villains? I know I will. How could I not, when I have spent so much time with them? It is like waving goodbye to friends on the train as the train pulls away from the station and leaves me standing there, sad but grateful that, for a time, all these fascinating people had graced my life.

But….there is still Winter’s Child, Vicky and Father John’s last adventure in crime solving. Let me tell you a little about it. When an Arapaho couple set out to adopt the white child left on their doorstep as an infant, they turn to Clint Hopkins, a well known adoption lawyer, and Clint insists upon bringing Arapaho attorney Vicky Holden into the case. But before they can meet, a black truck appears out of a blizzard and runs Clint down.

Vicky and Father John find themselves drawn into the mystery surrounding a white child growing up Arapaho. Where did she come from? Who had left her on a doorstep? What secrets did Clint Hopkins uncover that had gotten him killed?

Then Father John’s niece, Shannon O’Malley, arrives at St. Francis Mission to research the 19th century captivity story of Lizzie Brokenhorn, the white woman who had spent her life as an Arapaho, and soon Father John begins to suspect that the lives of two white girls, separated by more than a century, may be connected.

As he and Vicky edge closer to the secrets hidden in the past, they find they have moved into the sights of a killer—a killer willing to kill again to make certain the secrets remain hidden.

I hope you will enjoy this final mystery on the Wind River Reservation as much as I enjoyed writing it. Certainly, at the end of this long series, changes are about to occur. But how do those changes affect the deep and lasting devotion that Vicky and Father John have for each other? For the answer to that mystery, dear reader, you will have to read Winter’s Child. 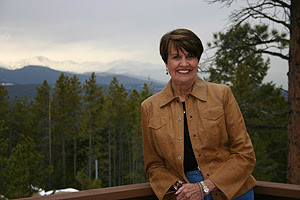 You can order signed copies of this final book, Winter’s Child, through the Web Store. https://bit.ly/2d21QQT