Anne Wilson welcomed authors John Sandford and Michele Cook to The Poisoned Pen the other day for a drop-in book signing.

The authors stopped in to sign Rampage, the third in their Young Adult thriller trilogy. 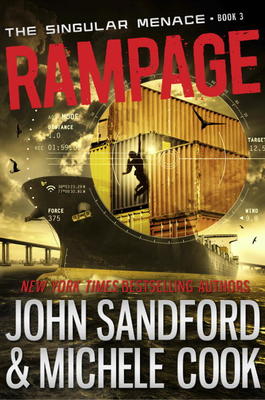 Here’s the summary of that book.

Shay Remby and her band of renegade activists have got the corrupt Singular Corporation on the run. Their expose is finally working. Or is it?

Even as revelations about the human experimental subjects break in the news, Singular’s employees are slithering out of sight. And then their CEO is killed in a plane crash… Was it a freak accident?  Or a cover-up?

Shay’s gang begins to see signs that there may be even more powerful figures than they knew managing events—publicly expressing outrage and mopping up the mess, but secretly gathering up their scientists and moving the operation further out of sight.

Are you looking for a new series for the young adult in your life? We have all three books in The Singular Menace series, and they’re all signed by the authors. Start with Uncaged, and move to Outrage.

Check them out in the Web Store now. https://store.poisonedpen.com/