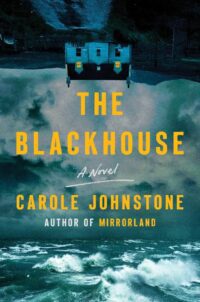 Scottish author Carole Johnstone recently did a virtual event with Barbara Peters, owner of The Poisoned Pen. Johnstone’s latest thriller, The Blackhouse, is available through the Web Store. https://store.poisonedpen.com/item/rPCoGQ_-yAUJCuWlAis4fg

Here’s the description of The Blackhouse.

From the author of the “dark and devious…beautifully written” (Stephen King) Mirrorland comes a richly atmospheric thriller set on an isolated Scottish island where nothing is as it seems and shocking twists lie around every corner.

A remote village. A deadly secret. An outsider who knows the truth.

Robert Reid moved his family to Scotland’s Outer Hebrides in the 1990s, driven by hope, craving safety and community, and hiding a terrible secret. But despite his best efforts to fit in, Robert is always seen as an outsider. And as the legendary and violent Hebridean storms rage around him, he begins to unravel, believing his fate on the remote island of Kilmeray cannot be escaped.

For her entire life, Maggie MacKay has sensed something was wrong with her. When Maggie was five years old, she announced that a man on Kilmeray—a place she’d never visited—had been murdered. Her unfounded claim drew media attention and turned the locals against each other, creating rifts that never mended.

Nearly twenty years later, Maggie is determined to find out what really happened, and what the islanders are hiding. But when she begins to receive ominous threats, Maggie is forced to consider how much she is willing to risk to discover the horrifying truth.

Carole Johnstone’s award-winning short fiction has appeared in annual “Best of” anthologies in the United States and United Kingdom. She lives with her husband in an old farmhouse outside Glasgow, Scotland, though her heart belongs to the sea and the wild islands of the Hebrides. She is the author of Mirrorland and The Blackhouse.