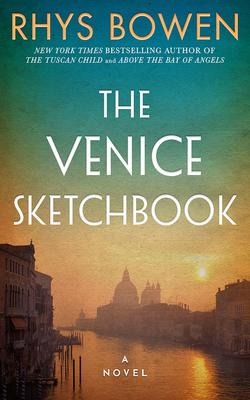 There’s an unusual sketch associated with Rhys Bowen’s The Venice Sketchbook. If you watch the YouTube conversation between Bowen and Barbara Peters, owner of The Poisoned Pen, you’ll be able to see Rhys Bowen’s own sketch on the cover of the book. Or you can order a signed copy of The Venice Sketchbook through the Web Store, and see the sketch in person. https://bit.ly/2LV4U1i

“Rhys Bowen crafts a propulsive, unexpected plot with characters who come vibrantly alive on the page.” —Mark Sullivan, author of Beneath a Scarlet Sky

Love and secrets collide in Venice during WWII in an enthralling novel of brief encounters and lasting romance by the New York Times bestselling author of The Tuscan Child and Above the Bay of Angels.

Caroline Grant is struggling to accept the end of her marriage when she receives an unexpected bequest. Her beloved great-aunt Lettie leaves her a sketchbook, three keys, and a final whisper…Venice. Caroline’s quest: to scatter Juliet “Lettie” Browning’s ashes in the city she loved and to unlock the mysteries stored away for more than sixty years.

It’s 1938 when art teacher Juliet Browning arrives in romantic Venice. For her students, it’s a wealth of history, art, and beauty. For Juliet, it’s poignant memories and a chance to reconnect with Leonardo Da Rossi, the man she loves whose future is already determined by his noble family. However star-crossed, nothing can come between them. Until the threat of war closes in on Venice and they’re forced to fight, survive, and protect a secret that will bind them forever.

Key by key, Lettie’s life of impossible love, loss, and courage unfolds. It’s one that Caroline can now make right again as her own journey of self-discovery begins.

Rhys Bowen is the New York Times bestselling author of more than forty novels, including Above the Bay of Angels, The Victory Garden, The Tuscan Child, and the World War II”“based In Farleigh Field, the winner of the Macavity and Left Coast Crime Awards for Best Historical Mystery Novel and the Agatha Award for Best Historical Mystery. Bowen’s work has won twenty honors to date, including multiple Agatha, Anthony, and Macavity Awards. Her books have been translated into many languages, and she has fans around the world. A transplanted Brit, Bowen divides her time between California and Arizona. To learn more about the author, visit www.rhysbowen.com.

Enjoy the conversation between two friends, Rhys Bowen and Barbara Peters. Rhys has all kinds of book news to share.