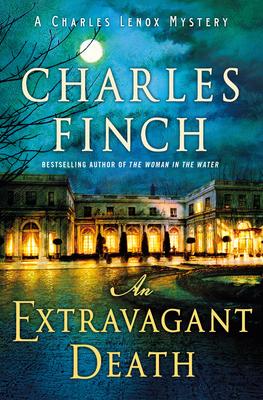 Charles Finch’s latest Charles Lenox mystery, An Extravagant Death, is the Hot Book of the Week at The Poisoned Pen. He’s also appearing for a virtual event on Friday, February 26 at 6 PM (8 PM) ET. You can find the event on the bookstore’s Facebook page, or go directly from the store’s homepage. You might want to order your signed copy of his new book now. https://bit.ly/2wTAsyM

Here’s An Extravagant Death, the Hot Book of the Week.

Charles Finch. An Extravagant Death (St Martins Press, $27.99 Signed). In what promises to be a breakout in Charles Finch’s bestselling series, Charles Lenox travels to the New York and Newport of the dawning Gilded Age to investigate the death of a beautiful socialite.

London, 1878. With faith in Scotland Yard shattered after a damning corruption investigation, Charles Lenox’s detective agency is rapidly expanding. The gentleman sleuth has all the work he can handle, two children, and an intriguing new murder case.

But when Prime Minister Benjamin Disraeli offers him the opportunity to undertake a diplomatic mission for the Queen, Lenox welcomes the chance to satisfy an unfulfilled yearning: to travel to America. Arriving in New York, he begins to receive introductions into both its old Knickerbocker society and its new robber baron splendor. Then, a shock: the death of the season’s most beautiful debutante, who appears to have thrown herself from a cliff. Or was it a suicide? Lenox’s reputation has preceded him to the States, and he is summoned to a magnificent Newport mansion to investigate the mysterious death. What ensues is a fiendish game of cat and mouse.

Witty, complex, and tender, An Extravagant Death is Charles Finch’s triumphant return to the main storyline of his beloved Charles Lenox series—a devilish mystery, a social drama, and an unforgettable first trip for an Englishman coming to America.

Charles Finch is the USA Today bestselling author of the Charles Lenox mysteries, including The Vanishing Man. His first contemporary novel, The Last Enchantments, is also available from St. Martin’s Press. Finch received the 2017 Nona Balakian Citation for Excellence in Reviewing from the National Book Critics Circle. His essays and criticism have appeared in the New York Times, Slate, Washington Post, and elsewhere. He lives in Los Angeles.