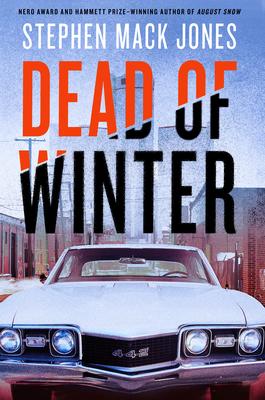 Yesterday, Deadline.com reported that Keegan-Michael Key is scheduled to headline a new PI drama called “August Snow”, https://bit.ly/39iuR4D. You may already be familiar with August Snow, the award-winning book by Stephen Mack Jones. It won the Hammett Prize and the Nero Award. In 2019, it was followed by Lives Laid Away. The third book in the series, Dead of Winter, is currently scheduled for a May release. It doesn’t hurt to check out the books now, before they hit TV. You can order them through the Web Store. https://bit.ly/3nq12nD

Let me introduce you to August Snow.

Winner of the Hammett Prize and the Nero Award

From the wealthy suburbs to the remains of Detroit’s bankrupt factory districts, August Snow is a fast-paced tale of murder, greed, sex, economic cyber-terrorism, race and urban decay.

Tough, smart, and struggling to stay alive, August Snow is the embodiment of Detroit. The son of an African-American father and a Mexican-American mother, August grew up in the city’s Mexicantown and joined the police force only to be drummed out by a conspiracy of corrupt cops and politicians. But August fought back; he took on the city and got himself a $12 million wrongful dismissal settlement that left him low on friends. He has just returned to the house he grew up in after a year away, and quickly learns he has many scores to settle.

It’s not long before he’s summoned to the palatial Grosse Pointe Estates home of business magnate Eleanore Paget. Powerful and manipulative, Paget wants August to investigate the increasingly unusual happenings at her private wealth management bank. But detective work is no longer August’s beat, and he declines. A day later, Paget is dead of an apparent suicide—which August isn’t buying for a minute.

What begins as an inquiry into Eleanore Paget’s death soon drags August into a rat’s nest of Detroit’s most dangerous criminals, from corporate embezzlers to tattooed mercenaries.

Here’s the information about the forthcoming book, Dead of Winter.

A shadowy Detroit real estate billionaire. A ruthless fixer. A successful Mexicantown family business in their crosshairs. Gentrification has never been bloodier.

Authentico Foods Inc. has been a part of Detroit’s Mexicantown for over thirty years, grown from a home kitchen business to a city-block-long facility that supplies Mexican tortillas to restaurants throughout the Midwest.

Detroit ex-cop and Mexicantown native August Snow has been invited for a business meeting at Authentico Foods. Its owner, Ronaldo Ochoa, is dying, and is being blackmailed into selling the company to an anonymous entity. Worried about his employees, Ochoa wants August to buy it. August has no interest in running a tortilla empire, but he does want to know who’s threatening his neighborhood. Quickly, his investigation takes a devastating turn and he and his loved ones find themselves ensnared in a dangerous net of ruthless billionaire developers. August Snow must fight not only for his life, but for the soul of Mexicantown itself.

Stephen Mack Jones is a published poet, an award-winning playwright, and a recipient of the prestigious Hammett Prize, Nero Award, and the Kresge Arts in Detroit Literary Fellowship. He was born in Lansing, Michigan, and currently lives in the suburbs of Detroit. He worked in advertising and marketing communications for a number of years before turning to fiction. Dead of Winter is his third novel.