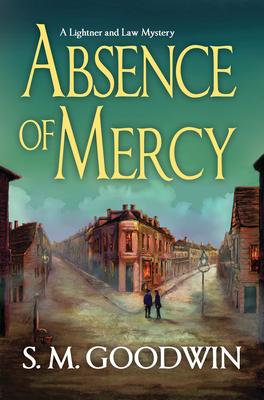 Although S.M. Goodwin has written romances as Minerva Spencer, Absence of Mercy is her debut mystery, a historical. John Charles from The Poisoned Pen interviewed Goodwin for a recent virtual event. You can find signed copies of Goodwin’s Absence of Mercy in the Web Store. https://bit.ly/2VbpVrK

Here’s the summary of Absence of Mercy.

A string of grisly murders in Pre-Civil War New York propels an unlikely pair of detectives into a deadly tinderbox in S. M. Goodwin’s debut novel, a sure hit for fans of Will Thomas and C. S. Harris.

Jasper Lightner is a decorated Crimean War hero and the most admired inspector in London’s Metropolitan Police. Along with a chest full of medals, he’s got a head injury that’s left large chunks of his memory missing. But Jasper’s biggest problem is his father, the Duke of Kersey, who, enraged by a series of front-page newspaper stories extolling Jasper’s exploits, decides he’s had enough of the embarrassment and uses his political connections to keep his son out of the headlines–and off the police force.

Jasper is sent packing to New York City on a year-long assignment to train detectives, and discovers a police department hovering on the brink of armed conflict. Assigned to investigate the murder of philanthropist and reformer Stephen Finch, Jasper joins forces with a man who might be even more of an outsider than he is: Hieronymus Law, a detective who had investigated two almost identical killings–and who is rumored to have taken money to help frame an innocent woman for murder.

Law is bent on restoring his good name. But can Jasper trust Hy enough to bring him into the investigation? As the city devolves into madness and law enforcement falls into the hands of dangerous gangs, this unlikely team has no choice but to work together to pursue an adversary more sinister than either has faced alone.

Here’s the virtual event, the conversation between S.M. Goodwin and John Charles.