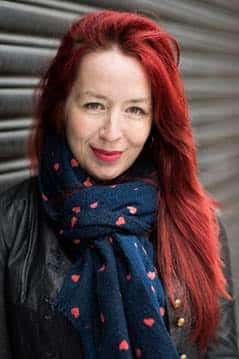 I heard several people at Bouchercon talking about Caz Frear’s new thriller, Sweet Little Lies. It’s a debut procedural, and I wanted to take the time to introduce you to the author. Caz Frear will be at the Poisoned Pen on Saturday, Sept. 15 at 2 PM. If you can’t make it there, you can still order a signed copy through the Web Store. (It’s always fun to be in at the start of a new series or a new author’s career.) https://bit.ly/2CEyF2V 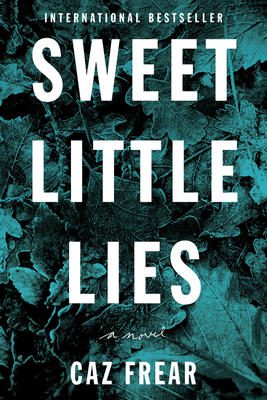 I hope you enjoy the interview when I put Caz Frear In the Hot Seat.

Caz, would you introduce yourself to readers?

Hi, I’m Caz, and I’m the author of Sweet Little Lies, the first of a series of crime novels featuring Detective Constable Cat Kinsella.  I live in Coventry, which is right in the centre of England, however I lived in London for fourteen years and still think of myself as an exiled Londoner!

Tell us about Cat Kinsella.

Cat is a young DC with the Metropolitan Police.  She’s had quite a dysfunctional upbringing – her father is very much on the fringes of the criminal world and most of Cat’s baggage stems from her suspicion that he had something to do with the disappearance of a teenage girl many years ago.  In terms of personality, she’s an “˜everywoman’ – not your average crime-fighting superhero. Cat gets things wrong, she uses food and alcohol as emotional crutches and she can be quite self-deprecating. In short, she’s not that different from a lot of us!  I really wanted Cat to be someone readers could to relate to, at least in some way.

Tell us about Sweet Little Lies, without spoilers.

Sweet Little Lies tells the story of DC Cat Kinsella who believes that her father may be involved in both the murder she’s currently investigating and the disappearance of a teenager from the west coast of Ireland in 1998.  It’s very much a police procedural at heart however it has strong domestic/family noir overtones as Cat struggles to balance her professional responsibilities with her personal allegiances.

My experience was quite unusual as I won a “˜Search for a Bestseller’ competition in the UK which meant that everything happened a lot quicker than the standard publishing journey.  I initially entered the competition back in March 2016 (entrants had to submit a synopsis and their first 10,000 words) and then in June 2016, I found out I’d made the shortlist of eight.  I had until Dec 2016 to finish my novel before the winner was announced in January 2017 ““ ME! After some frantic editing and promotion, Sweet Little Lies hit the shelves in June 2017 and it’s been a whirlwind ever since!  Harper bought the US rights last year (which brings me to this blog!) and it’s also been translated into several other languages.  Oh yes, and the TV production company who made Downton Abbey have optioned the book. Basically, the past 18 months have been a complete blast!

What has been the most exciting moment of your career as an author?

There has been so many but the one that stands out is hearing that Lynda La Plante loved my book and wanted to give a cover quote.  I’ve been in absolute awe of LLP since I first watched Prime Suspect in my early teens and I’ve read/watched everything she’s ever written.  She rarely gives quotes too which made it even more special and I cried for about an hour afterwards. I just couldn’t get my head around it!  It was like Aretha Franklin telling me I had a great voice or Serena Williams complimenting my back-hand â˜º It blew my mind.

Would you tell us about your next book?

Book 2 (yes we’re still calling it “˜Book 2′) has the same group of detectives investigating a brand new crime, however the events of Sweet Little Lies are still casting their shadow over Cat’s personal and professional life.  The main investigation focuses on the murder of a young woman and the suspect who claims his wife is framing him.  Who is telling the truth ““ the husband or the wife? Or is it even that simple?

You moved back to Coventry, England. Where do you take visitors when you want to show off your hometown?

Great question!  Coventry was recently named UK City of Culture 2022 so the city is busy preparing itself for an influx of visitors in 3-4 years’ time.  It’s been so amazing to see all the great arts projects in development, the run-down buildings being renovated etc. It’s honestly going to revolutionize the city!  But for now, the first place I’d head for is Coventry Cathedral ““ we actually have an Old Cathedral and a New Cathedral. The OC was bombed during the Second World War but the basic structure still stands, right next door to the very modern-looking NC.   After that, I’d take visitors to the Music Museum ““ Coventry is the home of 2-Tone (a blend of ska and punk) and the museum pays homage to that movement as well as other musical Coventrians! The Herbert Art Gallery would be my next stop and then I’d round off the day with a stroll around the grounds of Coombe Abbey before having a glass of champagne in the exquisite hotel bar!

Of course, just 20 miles away, there’s also Stratford-upon-Avon ““ the birthplace and resting place of  William Shakespeare!

Tana French and Lynda La Plante – who actually make an odd duo as they’re markedly different writers.  LLP really is the queen of plotting and pace, in my opinion. She’s a master storyteller and I treat her novels like textbooks.  Tana French, on the other hand, is my go-to author for stunning prose and razor-sharp characterisation. She was also the first author who taught me that you don’t exactly have to like a character to root for them.  I absolutely adore the wry humour she injects into her books.

What did you read as a child or teen that made you want to write a novel?

I’m not sure if I was thinking about writing a novel as far back my teens but I started reading my mum’s Agatha Christie and Ruth Rendell books at quite an early age ““ I was definitely a dark child!   Ruth Rendell, in particular, stayed with me and I often refer back to her novels when I’m thinking about how to build subtle suspense.

There’s a UK author called Chris Whitaker who has written two crime novels, Tall Oaks and All the Wicked Girls ““ both set in fictional small US towns.  Tall Oaks won the prestigious Crime Writer’s Association New Blood Dagger Award and ATWG is an equally great read, however neither has quite created the huge fuss that Chris and his exquisite writing deserve.  Here’s hoping that Book 3 will be his break-through!

Caz Frear grew up in Coventry, England and spent her teenage years dreaming of moving to London and writing a novel.  After fulfilling her first dream, it wasn’t until she moved back to Coventry thirteen years later that the writing dream finally came true. She has a degree in History & Politics, which she’s put to enormous use over the years by working as a waitress, a shop assistant, a retail merchandiser and, for the past twelve years, a headhunter. When she’s not agonizing over snappy dialogue or incisive prose, she can be found shouting at Arsenal football matches on the TV or holding court in the pub on topics she knows nothing about.  Follow her on Twitter at @CazziF.

In this gripping debut procedural, a young London policewoman must probe dark secrets buried deep in her own family’s past to solve a murder and a long-ago disappearance.

Your father is a liar. But is he a killer?
Even liars tell the truth . . . sometimes.

Twenty-six-year-old Cat Kinsella overcame a troubled childhood to become a Detective Constable with the Metropolitan Police Force, but she’s never been able to banish these ghosts. When she’s called to the scene of a murder in Islington, not far from the pub her estranged father still runs, she discovers that Alice Lapaine, a young housewife who didn’t get out much, has been found strangled.

Cat and her team immediately suspect Alice’s husband, until she receives a mysterious phone call that links the victim to Maryanne Doyle, a teenage girl who went missing in Ireland eighteen years earlier. The call raises uneasy memories for Cat—her family met Maryanne while on holiday, right before she vanished. Though she was only a child, Cat knew that her charming but dissolute father wasn’t telling the truth when he denied knowing anything about Maryanne or her disappearance. Did her father do something to the teenage girl all those years ago? Could he have harmed Alice now? And how can you trust a liar even if he might be telling the truth?

Determined to close the two cases, Cat rushes headlong into the investigation, crossing ethical lines and trampling professional codes. But in looking into the past, she might not like what she finds. . . .