Gina Wohlsdorf writes unusual thrillers. There was last year’s Security, and, now Blood Highway. Blood Highway is the current Hot Book of the Week at the Poisoned Pen. You can orders copies of both of her novels, including signed copies of Blood Highway, through the Web Store. https://bit.ly/2vMXYu1 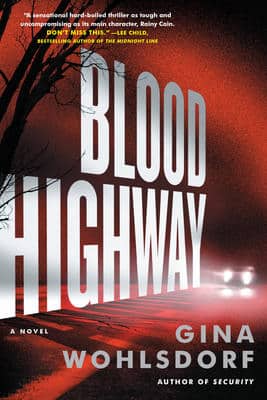 Here’s the summary of Blood Highway.

Meet Rainy Cain, a tough, smart seventeen-year-old whose primary instinct is survival. That instinct is tested when her life is upended by the sudden appearance of her father, Sam, who she thought was long dead, but instead had been in prison for his part in an armored truck robbery gone murderously wrong. Now escaped and on the run, he kidnaps Rainy, who he is convinced knows where the money from the robbery, never recovered, is hidden.

Accompanied by a henchman with secret motives of his own, they set off on a cross-country dash to Big Sur, where Sam suspects his late wife stashed the cash. On their heels is a Minneapolis cop intent on bringing Rainy safely home.

It is an odyssey that will push Rainy to the limits of endurance, and that will keep readers guessing until the very end. What does Rainy really know—and what is she willing to sacrifice in order to live?