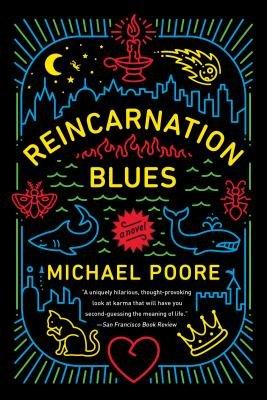 Here’s the summary of Reincarnation Blues.

A wildly imaginative novel about a man who is reincarnated over ten thousand lifetimes to be with his one true love: Death herself.

“Tales of gods and men akin to Neil Gaiman’s Sandman as penned by a kindred spirit of Douglas Adams.”—Kirkus Reviews (starred review)

Ten thousand tries, to be exact. Ten thousand lives to “get it right.” Answer all the Big Questions. Achieve Wisdom. And Become One with Everything.

Milo has had 9,995 chances so far and has just five more lives to earn a place in the cosmic soul. If he doesn’t make the cut, oblivion awaits. But all Milo really wants is to fall forever into the arms of Death. Or Suzie, as he calls her.

More than just Milo’s lover throughout his countless layovers in the Afterlife, Suzie is literally his reason for living—as he dives into one new existence after another, praying for the day he’ll never have to leave her side again.

But Reincarnation Blues is more than a great love story: Every journey from cradle to grave offers Milo more pieces of the great cosmic puzzle—if only he can piece them together in time to finally understand what it means to be part of something bigger than infinity. As darkly enchanting as the works of Neil Gaiman and as wisely hilarious as Kurt Vonnegut’s, Michael Poore’s Reincarnation Blues is the story of everything that makes life profound, beautiful, absurd, and heartbreaking.

Because it’s more than Milo and Suzie’s story. It’s your story, too.

“The most fun you’ll have reading about a man who has been killed by both catapult and car accident.”—NPR

“This book made me laugh out loud. And then a page later, it made me sob. Reminiscent of Tom Robbins and Christopher Moore, Poore finds humor in the dark absurdities of life.”—Chicago Review of Books

“Charming . . . surprisingly light and uplifting . . . It reads like a writer having fun.”—New York Journal of Books

You can “meet” Michael Poore in the video from Penguin Random House.