Michael Brandman, author of the second Buddy Steel mystery for Poisoned Pen Press, One on One, returns to the Poisoned Pen on Wednesday, Aug. 8 at 7 PM to discuss this series and sign books. If you can’t make it, you can order a signed copy through the Web Store. https://bit.ly/2vlzgAJ 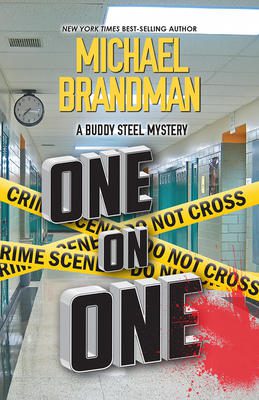 Would you like to know what the critics are saying about One on One? Here’s Elise Cooper’s review at Crimespree Magazine.  https://bit.ly/2M1FfUI

Cooper’s review ends with, “Buddy is a likeable character who uses self-deprecating humor, sometimes acting like an overgrown schoolboy. He is easygoing and can handle people poking fun at him. Being smart, caring, and understanding of people’s emotional pain, Buddy has a moral sense of right versus wrong.

“Readers will enjoy this fast-paced mystery.  With well-developed characters and a plot that takes issues straight from the headlines, this is a good read.”

Here’s the summary of One on One.

When legendary Sheriff Burton Steel summoned his son Buddy home from LAPD Homicide, a reluctant Buddy agreed. Burton is debilitated by ALS, Lou Gehrig’s Disease. While Buddy is to cover his back, not an assignment he wants, the clincher is it’s his last chance to connect with his proud, overbearing parent.

What Buddy didn’t expect was to encounter crime in Freedom, a privileged coastal community a hundred miles north of Los Angeles, as vicious and challenging as that of the city.

At the same time, a sudden scourge of graffiti is disfiguring both public and private property, despoiling the beauty and serenity of Freedom’s unassuming landscape. Outraged, knowing he has few legal weapons to wield, Buddy is forced to find new and challenging ways to thwart the street artist, or artists, responsible. Irreverent and imaginative, not to say manipulative, Buddy is just the man for the job.

Buddy’s plate is soon full and the stakes are enormous as he sets about bringing resolution to a glut of seemingly irresolute occurrences.

One on One follows Missing Persons, Buddy’s first investigation in Freedom.