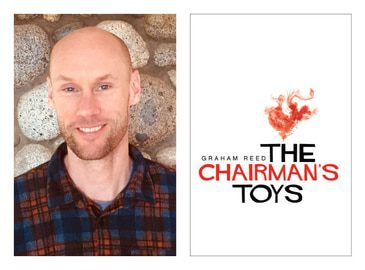 Here’s the summary from Bookreporter.com.

Graham Reed‘s debut novel, THE CHAIRMAN’S TOYS, introduces readers to Jake Constable, an ex-drug dealer who is determined to turn his life around — but the discovery of a dead body may put those plans on hold. In this interview, Reed talks about the authors to whom he turned for inspiration as he prepared to write his first mystery and the “research” he conducted for it; his fascination with crime fiction, which started at an early age (before he learned to drive); and the important lesson he learned about the writing process that he is applying to the second book in the series, which is currently in the works.

THE CHAIRMAN’S TOYS by Graham Reed (Mystery)
Audiobook available, read by Chris Andrew Ciulla
After Jake Constable quits the drug business, his realtor/ex-wife, Nina, gets him a job as a housesitter for her wealthy clients. Jake celebrates by throwing a party in the mansion he was hired to look after. Unfortunately, the guest list gets out of hand, leaving Jake to contend with a hallucinogenic vitamin-dispensing yogi, a dead guy in the bathroom, and The Norwegian — a criminal force of nature with a grudge against Jake. The situation threatens to become an international incident when Nina’s powerbroker uncle and two secret agents from China show up to turn the screws on Jake. Soon after that, his friends start disappearing. Reviewed by Roz Shea.