Fans of the Sherlock Holmes stories may be interested in a new nonfiction book about a case taken on by Sir Arthur Conan Doyle, author of those books. Margalit Fox’s Conan Doyle for the Defense is available through the Web Store. https://bit.ly/2KdoSne 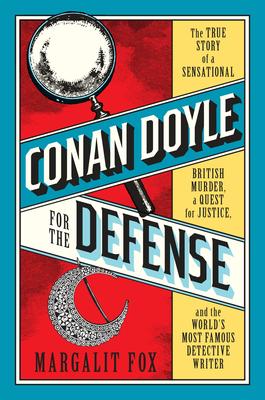 Fox recently wrote a piece for Publishers Weekly in which she discussed the actual case. It’s as intriguing as one of Holmes’ own cases.  https://bit.ly/2ttxifH

Here’s the summary of Conan Doyle for the Defense from the Web Store.

In this thrilling true-crime procedural, the creator of Sherlock Holmes uses his unparalleled detective skills to exonerate a German Jew wrongly convicted of murder.

For all the scores of biographies of Arthur Conan Doyle, creator of the most famous detective in the world, there is no recent book that tells this remarkable story—in which Conan Doyle becomes a real-life detective on an actual murder case. In Conan Doyle for the Defense, Margalit Fox takes us step by step inside Conan Doyle’s investigative process and illuminates a murder mystery that is also a morality play for our time—a story of ethnic, religious, and anti-immigrant bias.

In 1908, a wealthy woman was brutally murdered in her Glasgow home. The police found a convenient suspect in Oscar Slater—an immigrant Jewish cardsharp—who, despite his obvious innocence, was tried, convicted, and consigned to life at hard labor in a brutal Scottish prison. Conan Doyle, already world famous as the creator of Sherlock Holmes, was outraged by this injustice and became obsessed with the case. Using the methods of his most famous character, he scoured trial transcripts, newspaper accounts, and eyewitness statements, meticulously noting myriad holes, inconsistencies, and outright fabrications by police and prosecutors. Finally, in 1927, his work won Slater’s freedom.

Margalit Fox, a celebrated longtime writer for The New York Times, has “a nose for interesting facts, the ability to construct a taut narrative arc, and a Dickens-level gift for concisely conveying personality” (Kathryn Schulz, New York). In Conan Doyle for the Defense, she immerses readers in the science of Edwardian crime detection and illuminates a watershed moment in the history of forensics, when reflexive prejudice began to be replaced by reason and the scientific method.

Advance praise for Conan Doyle for the Defense

“I cannot speak too highly of this remarkable book, which entirely captivated me with its rich attention to detail, its intelligence and elegant phrasing, and, most of all, its nail-biting excitement.”—Simon Winchester, author of The Perfectionists and The Professor and the Madman

“Fox brings to life a forgotten cause cÃ©lÃ¨bre in this page-turning account of how mystery writer”“turned”“real life sleuth Arthur Conan Doyle helped exonerate a man who was wrongfully convicted of murder. . . . The author’s exhaustive research and balanced analysis make this a definitive account, with pertinent repercussions for our times.”—Publishers Weekly (starred review)