Did you make it to the Poisoned Pen the other night when Martin Walker was here? If not, you can still buy a signed copy of his latest book, the Hot Book of the Week, A Taste for Vengeance. It’s available through the Web Store. https://bit.ly/2K7FkC1 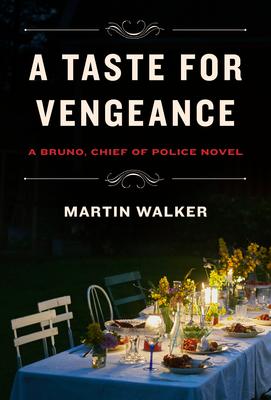 A Taste for Vengeance is a case for Bruno, Chief of Police.

A missing woman, a shocking pregnancy, a dash of international intrigue, and a bottle or two of good Bergerac: it’s another case for Bruno, Chief of Police.

When a British tourist fails to turn up for a luxurious cooking vacation in Bruno’s usually idyllic Dordogne village of St. Denis, the worried hostess is quick to call on Bruno for help. Monica Felder is nowhere to be found, and her husband, a retired British major, is unreachable. And not long after Bruno discovers that Monica was traveling with a mysterious Irishman (her lover?), the two turn up dead. The Irishman’s background in intelligence and his connection to Monica’s husband only raise more questions for Bruno. Was she running away? How much does her husband really know? What’s the real story behind a scandal buried in the threesome’s military past? Meanwhile, the star of the girls’ rugby team, a favorite of Bruno’s, is pregnant, putting at risk her chances of being named to the French national squad. Bruno’s search for the truth in both cases leads him to places he hadn’t intended to go–but, as ever, he and his friends take time to savor the natural delights of the Dordogne. SantÃ©!

And, of course, there will be food in the book. Walker recently took a look at other detectives and their eating habits in an article for CrimeReads.com. It’s called “Crime Fiction’s Best (and Worst) Meals”. If you like food with your mysteries, you might want to check it out. https://bit.ly/2tjkN7d