CrimeFest in Bristol just celebrated its tenth anniversary. One panel featured the authors and editors of Ten Year Stretch, the anthology published by Poisoned Pen Press that celebrates the anniversary of the conference. Panelists included editor Martin Edwards, along with Lee Child, Yrsa Sigurdadottir, Simon Brett, John Harvey, and moderator Donna Moore. You can read more about CrimeFest on Edwards’ blog, Do You Write Under Your Own Name? You can order Ten Year Stretch through the Web Store. https://bit.ly/2rVWFae 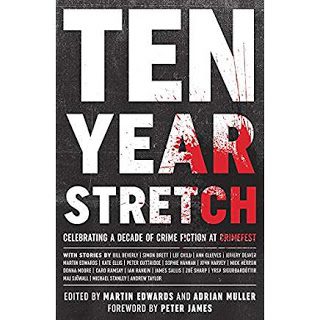 CrimeFest is another conference at which awards are presented. Some of the authors and books may not yet be familiar to American audiences. Some of the books haven’t yet been published in the United States. These awards are presented in England. Check the Web Store now and then if you’re interested in these titles. Some are already available. https://store.poisonedpen.com/

Here are the winners in the adult categories.

The Audible Sounds of Crime Award is for the best unabridged crime audiobook first published in the UK in 2017 in both printed and audio formats, and available for download from audible.co.uk, Britain’s largest provider of downloadable audiobooks.

eDUNNIT AWARD
The eDunnit Award is for the best crime fiction ebook first published in both hardcopy and in electronic format in the British Isles in 2017.

LAST LAUGH AWARD
The Last Laugh Award is for the best humorous crime novel first published in the British Isles in 2017.

H.R.F. KEATING AWARD
The H.R.F. Keating Award is for the best biographical or critical book related to crime fiction first published in the British Isles in 2017. H.R.F. “˜Harry’ Keating was one of Britain’s most esteemed crime novelists, and a renowned reviewer and writer of books about crime fiction.

THE PETRONA AWARD
CrimeFest also hosts the presentation of The Petrona Award which was created in the memory of Maxine Clarke by her friends and colleagues. The award celebrates the best of Scandinavian crime fiction.

Winner – QUICKSAND by Malin Persson Giolito, translated from the Swedish by Rachel Willson-Broyles (Simon & Schuster) – To be released in the U.S. in August, 2018.