Barbara Peters, owner of the Poisoned Pen, loves to introduce debut authors and their books to readers. This past week, she introduced Nova Jacobs, author of The Last Equation of Isaac Severy, by reading several reviews of the book. Here’s Bethanne Patrick’s review in The Washington Post, “A hilarious novel about family, death, madness – and math”. https://wapo.st/2FJKOou. Once you get past the possibly scary word, math, you might want to order a copy through the Web Store. https://bit.ly/2prG4tF 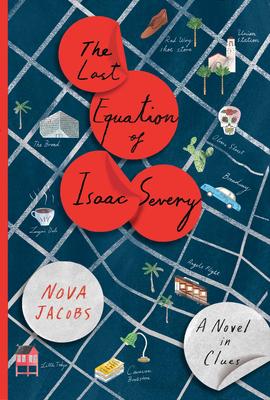 You can see the interview via Livestream. https://livestream.com/poisonedpen/events/8112998

Here’s the description of The Last Equation of Isaac Severy.

*Book of the Month Club Selection
*Indie Next Pick

“Hugely entertaining… The Last Equation of Isaac Severy is full of delight. Though Ms. Jacobs’s writing has echoes of Thomas Pynchon, Nathanael West and J.D. Salinger, her terrific book displays in abundance a magic all its own.”
—The Wall Street Journal

The Family Fang meets The Storied Life of A.J. Fikry in this literary mystery about a struggling bookseller whose recently deceased grandfather, a famed mathematician, left behind a dangerous equation for her to track down—and protect—before others can get their hands on it.

Just days after mathematician and family patriarch Isaac Severy dies of an apparent suicide, his adopted granddaughter Hazel, owner of a struggling Seattle bookstore, receives a letter from him by mail. In it, Isaac alludes to a secretive organization that is after his final bombshell equation, and he charges Hazel with safely delivering it to a trusted colleague. But first, she must find where the equation is hidden.

While in Los Angeles for Isaac’s funeral, Hazel realizes she’s not the only one searching for his life’s work, and that the equation’s implications have potentially disastrous consequences for the extended Severy family, a group of dysfunctional geniuses unmoored by the sudden death of their patriarch.

As agents of an enigmatic company shadow Isaac’s favorite son—a theoretical physicist—and a long-lost cousin mysteriously reappears in Los Angeles, the equation slips further from Hazel’s grasp. She must unravel a series of maddening clues hidden by Isaac inside one of her favorite novels, drawing her ever closer to his mathematical treasure. But when her efforts fall short, she is forced to enlist the help of those with questionable motives.