Did you know this is Brad Meltzer’s twentieth year in the writing business? He’ll be at The Poisoned Pen on Thursday, March 15 at 6:30 PM. He’ll be joined by Alma Katsu, author of The Hunger. Meltzer will be signing his latest book, The Escape Artist. Signed copies can be ordered through the Web Store. https://bit.ly/2F6Oi05 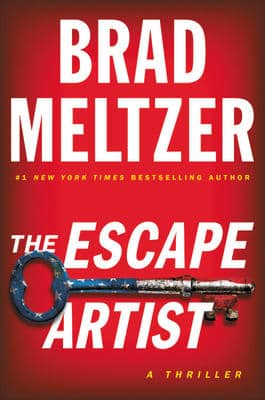 Here’s the summary of The Escape Artist.

“Meltzer is a master and this is his best. Not since The Girl with the Dragon Tattoo have you seen a character like this. Get ready to meet Nola. If you’ve never tried Meltzer, this is the one.”–Harlan Coben
WHO IS NOLA BROWN?
Nola is a mystery
Nola is trouble.
And Nola is supposed to be dead.
Her body was found on a plane that mysteriously fell from the sky as it left a secret military base in the Alaskan wilderness. Her commanding officer verifies she’s dead. The US government confirms it. But Jim “Zig” Zigarowski has just found out the truth: Nola is still alive. And on the run.
Zig works at Dover Air Force Base, helping put to rest the bodies of those who die on top-secret missions. Nola was a childhood friend of Zig’s daughter and someone who once saved his daughter’s life. So when Zig realizes Nola is still alive, he’s determined to find her. Yet as Zig digs into Nola’s past, he learns that trouble follows Nola everywhere she goes.
Nola is the U.S. Army’s artist-in-residence-a painter and trained soldier who rushes into battle, making art from war’s aftermath and sharing observations about today’s wars that would otherwise go overlooked. On her last mission, Nola saw something nobody was supposed to see, earning her an enemy unlike any other, one who will do whatever it takes to keep Nola quiet.
Together, Nola and Zig will either reveal a sleight of hand being played at the highest levels of power or die trying to uncover the US Army’s most mysterious secret-a centuries-old conspiracy that traces back through history to the greatest escape artist of all: Harry Houdini.
*****
Curious? Alex Segura wrote an excellent article for The Big Thrill. It’s called “A Return to Roots”, and it includes comments by Brad Meltzer. You can read it here. https://bit.ly/2F3DSOI